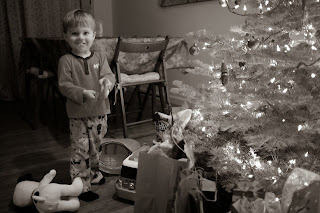 Couple things. Heavy Whipping Cream is not the same as Half and Half and can not be used in the same way. I know that now. It is well to have learned that lesson on New Year's Eve. I would not wish to bring that heavy ignorance into the following year with me. Best to leave it in the past, where it belongs.

As for the picture above, sometimes it is easy to forget that not every person that knows me is a friend of mine on a social media site. Some people keep up with my topsy-turvy inner world here, instead. I had posted that picture on Facebook on Christmas Day (after somebody reminded me to do so) and it was a hit. The classic and timeless image of a boy on Christmas. What fun.

Well, I don't have much to say this morning. I slept in late, for me. I was up until around 10pm, practically an all-nighter, for me. Now, I will coffee myself up for the gym, prepare for the day ahead. It is the last of its kind, we're told.

Very few events on the calendar reveal how absolutely asinine people are, or can be. They will denounce the previous year as if the Gregorian calendar, of all things, is to blame for their current sorrows. We are meant to understand that the year brought them some known misery, but they are strong and will overcome it all, with the help of the rapidly advancing next year, a time that they are greatly looking forward to and will prove it so by achieving a mawkish level of revelry and intoxication sometime later today, building up to a crescendo at midnight.

The only shame on this day is, apparently, not having a lover to kiss when the clock strikes doom for the past and cheer for the future, a thing that it does each and every second if we are to understand and believe the message of this moment. This yearly Cinderella story in reverse grips the minds of most Americans, though oftenest in the form of the lottery.

One of my most perverse joys is asking people to pray for me. Sometimes I'll reference some ill boding online, without specifics, and those who do not know me well enough will fall into my venus fly trap-like snare.

There was a study that once showed that having people pray for you, at least among believers, was bad for them. Once they found out that their loved ones were praying for them then they believed their condition to be worse than it was and sometimes resulted in their decline, or demise. More often than when people were not praying for them, or when strangers were, or when they did not know that anybody was praying for them.... So the science is in: prayer is dangerous.

I might be overstating its negative powers, but here is an article about the study.

Apparently, the best thing to do when a loved one is sick is to let them know, often, that nobody at all is praying for them.

This time you're going to need to save yourself.... Only you can worm your way into heaven this time.