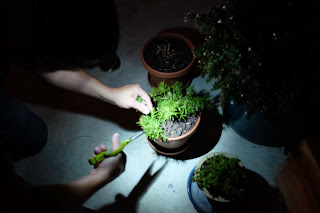 It is cold, so I lie in bed longer than I should. I pull the covers up under my chin and close my eyes. I roll over. My back hurts a little from being prone for too long. I toss and turn and then try to give sleep one more chance. I wish there was a Starbucks in my bedroom, or just out in the hall, and I wish that they delivered. I think of all the things that I would eat: muffins, pumpkin loafs, cookies, sweetness. And coffee.

Eventually I would show one of the girls at Starbucks my morning hard-on and then afterwards it would be awkward to use the hallway to get to the bathroom. I would feel stupid. They would all glare at me as if I had done something wrong. Yet she is the one who now has richer life experience because of it. I refuse to believe that such a thing is harmful, among adults. At most it is disturbingly comical, yet somehow also very illegal.

She would first describe it to the police as "his thing," knowing that "cock" isn't the appropriate term to use with them.

The cop would then correct her, "You mean his penis?"

I can understand their attitude about it though. Not the cops, the Starbuck girls. It is an ugly thing, an erection. There's not much that can be done to improve its looks. I have often tried. There is no penis makeover, no television shows dedicated to its betterment. Only mystery improves it. I can't even masturbate if I look at it too much. It's a hideous turn off. I have to put a pillow up between myself and it so that I can hopefully think of other things, and pretend that it is just something that is happening to me, it will all be over soon enough, and not to anger it. It feels as if I am being attacked by a dumb animal with one hand, when it is happening.

I just keep repeating, "Oh god, gross, don't touch that! What are you doing? You don't know where it's been. Ewww, the stuff is coming out…. Now there's that all over. Do you see what you've done? You should be ashamed of yourself. Don't just go back to sleep…."

That's what I think.

When it is all over, I am ashamed, and sleepy. I will sometimes nod about it when asked. It makes me feel dirty. The shame, and the mess, and then all the ice cream.

I am gaining weight again, somehow. It must be the food, all of the delicious food. I have narrowed it down to that. It is not a lot of weight, but the scale is moving in the wrong direction. They have threatened to cancel my contracts. I look to Christina Hendricks for strength. Or in a pinch, Jessica Simpson.

Kirstie Alley scares children. Why is she legal?

It must be the stress of the new job, the returning weight. Did I mention that here? I must have. I tell you guys almost everything. Almost.

I never wanted a secret life, with secret thoughts. But I sure got one.

Do you want to know a secret now?

The heart is deceitful above all things, and beyond cure; who can possibly understand it?