To the jail bait who stole my life vest: 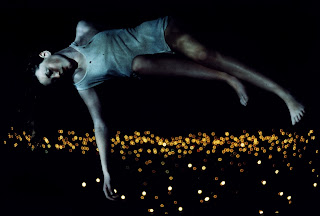 Okay, I stole a photographer from CS for my image this morning. He won't mind. I like it, and CS is good at sharing the names and work of other artists.

There is no reason that I can't be making similar images to the one above, except that I don't own Photoshop, Lightroom, or any other photo editing software. I think that I have a copy of Apple's one. It is discontinued now, I think. Henson's other images would not be so easily imitated, I do not think. A soft focus lens will help, but will not carry the conceptual burden of the work through to completion.

I think; I think.

Aperture, that was its name. I just checked on my computer, and yes, there is a prohibitory sign that lets me know that it will not be used on their new and improved platform, along with a bunch of other software. That is a company that is always looking to future revenues, and one way of getting there is reselling software to users. Companies must be shitting themselves with joy over the idea of software as a subscription. Why sell anything when you can just charge people in perpetuity instead.

We're so happy we can hardly count...

Cato told me that I was on my soap box recently, so I'll stop.

I would offer my opinion of the weekend in Charlottesville, but for what purpose?

Oh, fuck it, I have a couple minutes for soapboxing:

Liberals do not like to be told they are acting foolishly. Conservatives are used to it, though they'll still kick your stupid fucking ass for it. That's where liberals are out of their depth: violence, either understanding it or with dispensing it. I don't gravitate towards it but I have come to expect it. I grew up in a place and time - the south in the 70s and 80s - in which a challenge of almost any kind was met with a fist or several arriving in rapid succession, and not always from the person you thought you were fighting.

So, you learned to speak in such a way that the dullards couldn't understand you, or you learned to take a punch, or dodge one. I settled on a little bit of each of those strategies, but I never expected to think that punch wasn't coming when I was either being a smart-ass or if I was in somebody's face reminding them how vile, wicked, and stupid they are. There are better ways to demonstrate that fact. One way is to just stand back and let them establish it all for themselves. It rarely takes very long.

If you're going to challenge what people have come to believe are their traditions, with the intent of destroying those presumably esteemed traditions, then you had better arrive with something other than just a handful of liberal ideals. It's true that the only thing that can beat a bad idea is a better idea, but the same holds true for fists and boots.