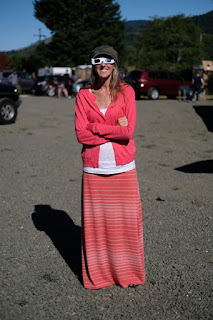 The color quality of the light during the eclipse was hard to describe, of course most cameras adjust the white balance. I could try to correct for it but this is only a jpeg. I snapped this one perhaps a full minute or two before totality. I suppose that it could simply be described as "darker" but that doesn't convey the entire experience. The eye could still take in light from the horizon, where all was as it should be, and it did not look as if a cloud had merely passed between the sun and us, though that comparison would be the closest. It was almost as if a cloud that had a color filter in it had done so.

It's very nice to see Rachel again. It feels as if I haven't seen her in the longest time, since the eclipse nearly. We leave now to go do a number of things. There will be a breakfast with eggs and bacon and coffee. Well, this being southern California, there may be egg whites and wheat toast and avocado.

I just asked Rachel, What do people in southern California eat - egg whites, and wheat toast and avocado?

Sure, that sounds great.