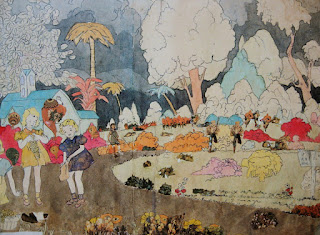 I'm on vacation again for a week. That's two weeklong vacations in two months - Florida and Oregon. I wonder if I'll notice any differences between the two states.

Few people know this, but Florida has never experienced any lunar blocking of sunlight, or any other kind of solar protection, for all of human history. Even their darkest rain clouds are built to amplify the sun's most harmful rays. They like it that way. The sunscreen they sell there is only tanning accelerator. There is a massive sun bathing light that hovers over the state for use at night. NASA helped them put it into orbit. It runs on power siphoned from the grid and teleported to the great tanning bed in the sky by a special team that Elon Musk and George Soros funded.

Please don't tell any of your right-leaning friends. They have too many conspiracies to wrestle with as it is. Did you know that the Charlottesville event happened on George Soros' birthday? What more proof do you need that white supremacy is a liberal conspiracy, designed presumably only to make racists look bad by being associated with liberals....

Seriously. I saw people trying to merge the KKK / neo-Nazis with the progressive philanthropist who actually survived Nazi occupied Hungary. People are desperate when desperation is what their heart needs - a conspiracy to denounce thought that differs from their suspicions.

Speaking of, I was thinking of the things that separate nationalism from white nationalism and I couldn't find any. That's because nationalism is just a slightly watered down version of abject stupidity. I'm not talking about being proud of the principles upon which your society was built. I mean jingoistic flag waving and empty sabre-rattling patriotism for your nation, regardless of its glaring errors.

Trump has successfully blurred the distinctions between his own voting base and the KKK. He really has. His equivocation and support for white nationalist causes has lumped them together whether they like it or not. The big man with the president pants has, without anyone asking him to, pushed the rock off of himself and his cabinet to reveal what they were not quite able to crawl out from under on their own. The only way for a person wearing a bright red "Make America White Again" hat to recuperate now would be for them to take that stupid fucking hat off their head and to start speaking out against the monster that they have made, and what has become the clear intent of his presidency.

Many have already said it, but that man needs to go. What more can he possibly do to advertise his intention to aggregate power, disrupt democratic norms, and destroy any opposition. He is becoming the very dangerous populist that about half of us knew that he would.

He said it best the other day, Where does it stop?