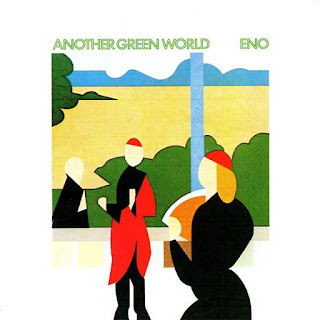 So far today, again, this is all that I have listened to - Eno. Everything about it is artificial, except perhaps the feeling it evinces, which is unique among the Eno albums. No easy feat.

I'll try to wrap up at work and go for a bike ride before I lose my mind and attempt the lofty turd dirigible of Floyd's Live at Pompeii again. That is some weird shit, man. I've been reading about music lately. I found an article that contained some good writing and observations, a rarity in what passes for music journalism. I wanted to print it out to read it, to savor it, to feel the written word in my hands.

Bowie embezzled a fair amount from the above album, at least musically. Few, I do not believe, would ever bother imitating Eno's vocals. Yoko Ono, maybe, and that damned Peter Murphy. Actually, that would have helped Ono's vocals tremendously, had she only tried to imitate somebody. It was her unrestrained and untrained nature that has made her so enduringly unbearable. Fuck Yoko. How did I start writing about her? She has one song that I genuinely love, and a small handful that I'll tolerate. The rest is rubbish.

So yes, Bowie was a clever thief. He had the paranoid wherewithal to at least enlist Eno's talents in the heist as it was happening. Classic coke-head maneuver. Who better to flatter with thievery than the owner of the pieces to be stolen? Bowie tried to do it himself on Station to Station but must have just given up and decided it would be much easier to lift bits from Eno than it was to ever try and imitate him.