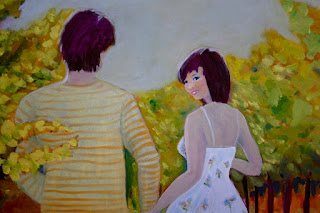 (What the true love of a vineyard looks like)

So, there goes all of my savings.

Ah well, the D810 seems to be holding its resale price for now. There is a chance that I will have grown bored of photography before the new model is released. I'll be forced to buy it anyway, to try to save the relationship. That always works. The surest way to stay in love with something is to spend more money on it.

We'll see. I almost bought that painting above recently during lunch at a local cafe. $300. I couldn't decide which room to put it in amongst the many to choose from in our palatial upper-westside Sonoma suite. The purple hair of both of the two semi-human subjects as well as the grapevines along the edge clashed with all of the other decor that I have used in the room so far. I am trying to establish a fan pay sanctuary / highway rest stop as a sort of mortuary or mausoleum dedicated to the success of Prince's seminal 1984 album, while also acknowledging the unfortunate and unexpected accidental drug death of its creator. Patrons would pay by the hour to sit and listen to the album played on rotation.

I'm checking with the city to verify that we are zoned for such commercial traffic.

At this point the current mourners will be prompted to pay again if they wish to hear the album repeat in its entirety. I'm trying to get Madame Tussauds to make me a wax effigy that I can put within a hyperbaric coffin, like Vladimir Lenin, but dressed in purple.

Ok, I have run out of stupid ideas, but never for very long.


Sit back and try to enjoy this motivational video from the world's most famous motivator, Tony Robbins: