When the river was contrails 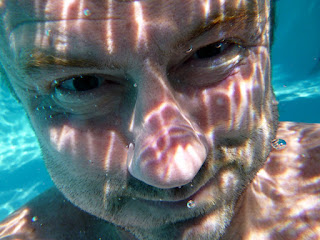 My son is watching some animated film that concerns itself with a struggle amongst the various members of the animal kingdom, the difficulties they each have understanding one another based on their caricatured dispositions, somehow all becoming better for the effort, laughing at their trials once bested without a single unnecessary death meant to assert dominance or survival.

The magic of cinema is that you can tell stories between the intervals in which large animals feel they must eat. It allows for other stories to occur to imaginative minds. It is called the suspension of disemboweling by those in the cinematic know.

I believe that is the plot and message of the thing, anyway - a didacticism, of sorts.

I wore one of those specially tapered, form-fitting, elastic bags around my lower thorax, so that I am floating in warm urine and no one has to know. Even the vaguely suspicious around me become complicit in my ever deepening taboo lagoon. It is the assumption of positive intent. I could feces myself, but the advert was not clear on whether or not that is the expectation or rather the upper limit of what the product provides in terms of comfort and what one can reasonably expect, given the changes in altitudinal pressure.

Sorry about that folks, we're experiencing a little unexpected turbulence.  We've leveled off now at an even 36,000 psi.

So Sorry: I used to fly more than I cared for and never adopted the idea that it was, in itself, glamorous or exciting. It is dull to the point of mania. I have pointed aversions to it. I'd rather hold my mother's hand in an abortion clinic than be in an airport, or on an airplane.

That's just me, other people hate to exercise. They have different stories to tell.