All roads lead to Main Street 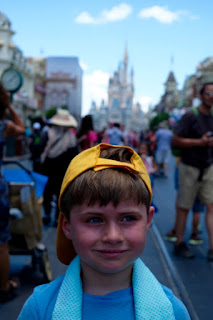 It's nothing short of thinkable, when you're standing in it and looking around, the price of it. Had we bought entrance tickets yesterday then the entire day would have cost us somewhere around a thousand dollars. We rode three rides. My brother bought us a quick lunch, the easiest that we could find, somewhere in the dubiously named Tomorrowland - five hot dogs and five waters: $65, eaten in the direct heat of the overhead Hades.

We stopped and had a sit down dinner in air conditioning on our way home: also $65, with tip. This is, after all, Florida. Food is cheap, so even the poor can be as fat as they care to be. Calories here are of the inclusive kind. What Florida food lacks in nutrients it makes up for in low density lipids.

I know that it is commonplace knowledge, but still... it boggles the mind that people come from all over the world to throw their currency at Disney. They do a good job at manufacturing magic, mystery, and wonder in the minds of children. They invoke shame, hysteria, and disdain in that of parents. Or, should. I kept trying to make eye contact with other parents, and teenage girls, to see if they were as ashamed as I should have been at what was happening between us.

It is truly a kingdom of magic; the dark arts of late capitalism.

Space Mountain was closed. They wouldn't tell us which had failed, the space portion or the mountain part. That was the only ride that I cared about and that's mostly just a bit of nostalgia for when it opened when I was a boy. That ride opened in 1975, the same year as Aerosmith's Toys in the Attic was released. They have both held up about the same, still feeling like cheap speed - over too soon and too expensive. It's ephedrine at cocaine prices. They share common side effects.

Rhys loved The Haunted Mansion, but that's because I told him that his dead grandfather now lives there. I can be ghoulish.

I made the mistake of bringing a camera and three moderately heavy prime lenses with me. The lone image above represents the misguided and misspent labor from that completed endeavor. Don't let the sky in that image fool you, this is Florida. It rained 60 seconds later. Just enough to soak all of us, not enough to cool the surface of the earth any, but rather only sufficiently to make walking on pavement sticky and humid. It was as if the Disney gods poured a little water on the sauna rocks that line the edge of the swamp, nothing more. I would show you a picture of the skin between my legs and my balls but here is not the place for that sort of thing and I try to keep those images attached to posts in which I have not already mentioned Aerosmith.

Today, we'll go out to Kennedy Space Center. The boys will get to see rockets and astronauts' suits and listen to boring talks that suggest the advancement of mankind through science, technology, and taxes. Also that.... a man's reach should exceed his grasp, Or what's a heaven for....

Indeed, what is a heaven for. It's only a matter of time before it ends up being the great storage unit in the sky. Sort of a "Two Men and a Ghost Truck" for the spiritually inclined. For those who have been storing up riches in heaven, like stacks of old National Geographic magazine, or old family furniture that mom just could not bring herself to part with.

If heaven ever has a yard sale then they'll need to keep it open to the public. That's my plan to sneak in. I'm hoping to find a nice hiding space somewhere deep in the climate controlled portion, after the big weekend sale comes to a close and the pearly gate begins its automated click of electronic descent. By now the road to hell must be well paved with resold paraphernalia.