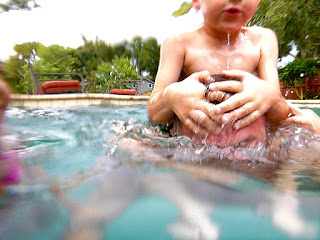 (How he steers his balding submarine)

I can't seem to catch up with my life. I had thought a full weekend, including a day off on Friday, would allow for that, but no. My bags are still packed and where I left them near the door at home.

Yesterday, we all went to Angel Island to ride bikes. We rode the ferry across from Tiburon. Perhaps mom and I were a little ambitious in terms of what we believed our son's riding skills to be.  We did pretty well going along the side of the island that faces the city and the Golden Gate, which was mostly uphill, but when we hit a sign that said that we had only gone 1.6 miles and there was another 3.4 to go to circumnavigate the island. Circumnavigate is perhaps not the right word for being on an inland road that circles the island, but fuck it, you get the idea. We did the perimeter.

Once we turned around to go back the way we had come the first words I had to offer our son were that things would become easier now as we would be heading mostly downhill, but to be careful, going downhill can cause you to accumulate speed at a rate that you're not used to, you have to be aware of how to stop when you're afraid.

We hit the trail that led away from the road and down back towards the cove where the docks are that went from being paved to being gravel a few hundred yards in. The boy passed me and excitedly explained that he was meant to be the leader and that he should be in the front. Immediately I said, Nope, brakes buddy, brakes... as he headed towards the next switchback turn in the trail.

It was too late. I screamed Brakes, Brakes!!! again, loudly enough for mom to hear from way back up the trail but words could not stop what happened next. He hit the wood guard rail without his feet on the pedals and without his hands on the inline brake lever on the handlebars. It was him hitting it at that higher speed which broke through the wooden guard rail, though his body went over his head in a single front-flip motion. He disappeared down into the crevice which the wooden rail was ostensibly meant to prevent riders or hikers from entering. I was there as it was happening, in a sense, but there was nothing that could be done to stop it. If there's anything that a five year old knows, it's who should be leading the pack. He led us about fifteen feet down the side of a hill covered in what at first appeared to be poison oak.

I was down the hill with him and had him picked up off the ground pretty quickly, with amazingly only a few scratches on his arm and back that I could find while holding him as I climbed my way out of his adventure. I verified that he had not been impaled, that no part of the external world was now in contact with any of his vital organs. Somehow he had avoided being stopped suddenly and dramatically by any of the sharp sticks or thorny bushes that populated that fallaway side of the turn above. He had hit hard and then slid down the only possible path that didn't include a boulder or stump or something else equally horrible or eternally damaging. He was wailing, which adds to a sense of panic in a scenario like this, but I had him back up to the path quickly and was passing him over to mom to do another vitals check.

Amazingly, he was mostly unharmed. It took mom and I about fifteen minutes each to believe it. I tried to act as if it was no big deal, but seeing your son disappear over the side of a trail guard rail and into a drop-off of unknown depth and character is not something that leaves you easily. The mind begins to work its way through other possible outcomes, some of which seemed more likely than the one we were lucky enough to have experienced, and what the rest of our day might look like in terms of a helicopter medi-lift off of the island with EMTs working to do what they can.

There was one other witness to the whole thing, a woman who was quite reassuring to him after it happened and as we were recovering from the shock of it. Later, by the ferry, I saw her blowing kisses to the sun and walking around as if it was maybe her lone, personal celebration of her 500th strong acid trip (she doesn't count single doses), blowing more kisses to the sun and being in a general state of confused euphoria, a smile on her face that advertised her sense of self: ex-California cult member, now doing quite well and living a happy life without The Family. She no longer goes by her group-given name of endearment, Mandala Gangbang.

Anyway, the boy survived his first near death experience. I say that with no intended humor, though I know there has been a hint of that in what I have relayed here. The rest of our lives could have unfolded very differently from that moment. In an instant that can not be returned to, we lucked out, and were even afforded a nervous bit of laughter about it later in the day. I'd like to think that my temporary renaming of him as Evel Kneivelhead helped a bit. Had we known in advance then we could have set up a ramp. I'm confident that with his speed and direct approach on the trail he could have easily landed forty-five feet down the side of the embankment. Who knows, maybe sixty.

The sky is but one limit.