The deepest of sleep 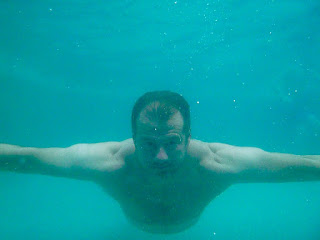 Nope, I slept well last night, even after a day of very deep sleep. It makes no sense - I don't feel sick, I haven't done anything that was particularly depleting. If it was not for my back hurting from being in bed too much then I would lie around a bit more, but I have already left the apartment to get a big Starbucks' coffee and soon I will want to ride my bike or go to the gym, or both.

There is a baby wailing somewhere in the near distance. I have heard it for maybe fifteen minutes. I want to go and check on it, but I know what I will find: someone first apathetic and then angry at my appearance.  What right do I have to question to the unceasing wails of a child?

Nope, it just stopped. I hope that's a good thing. Fifteen minutes may have been an exaggeration. It felt like fifteen minutes. Now that it has stopped it seems that things must have been fine all along. Some people let children wail it out. It is a different style of parenting - no cause for alarm, no need for intervention.

Today there will possibly be a journey out to Angel Island. We have talked about bringing our bikes and riding around the island. I must do some sort of physical activity.

The internet is becoming too useless to use any more. I just did a quick search to verify if when you sleep too much your body will accumulate carbon dioxide in your bloodstream and I landed on two sites that seemed like they might offer a coherent answer and twice I could not back out of the site to my own search results. There is some voodoo out there that, once you have made a click mistake, will lock you into popup ads and  misinformation and will never let you find your way out again. The internet could have been such a fine and damn good thing, but they let all the people on. It's proof of the failed concept of democracy. Not everybody should have a say in things, and advertisers should be ostracized.

That is too large of issue to tackle this morning. People ruin everything, ask anybody.

Okay, whatever the day holds for me it won't magically appear at the table in front of me. I will need to do stuff myself today. There is a growing list of things that are meant to be prioritized, but prioritizing the list has fallen to spot number three and the things that occupy spots one and two are overwhelming. Until I can correct for that and maybe break some of the larger tasks down into components I will just have to learn to live with a paralyzing sense of failure at making and completing lists. Or, even starting them.

I watched the first episode of "The Defiant Ones" last night. It had me buzzing about all sorts of things. I've known the name Jimmy Iovine for many years but had never stopped and considered his history or even what his major accomplishments are. It was a good biopic on him and his relationship with Dr. Dre, particularly from a music fan's perspective. Or rather from someone who enjoys the history of music and how it gets made. There were a handful of quotes and clips that had me buzzing but also left me a bit melancholy.

The realm of electronic music only has the occasional crossover into the "real" music world, at least in terms of smash success, but when I look back at my own experiences I realize that I could have tried more. I cultivated an idea that I didn't have to try very hard and most of the time it would still be good, or interesting, and sometimes marginally better than what else was being made. I was, of course, wrong, and that approach was lazy, and that is the nicer term to describe it. I could have done more and could have made what I had done much better. It's easy enough to hear that now when I listen back.

There is a great quote about him, Iovine, wanting his fears to be a tailwind and not a headwind, which resonated with me. I suppose at some level I was afraid of genuinely trying and that effort somehow not being good enough. So, instead I tried to show that I could make cool tracks without really trying all that much. It was foolish and wasteful, the output perhaps of a drug addled sense of self. It was a lesson I learned only later that there is more shame in half effort than there is in full efforts that don't quite land. You end up becoming the thing that you practice to become. Being half-assed results in an average that is lower than what you might have initially hoped for, even with the occasional success. I made a lack of trying the goal, rather than allowing the thing that was being created to matter the most.

I remember one time I came home with some new recordings that I had done. My girlfriend at the time commented on them as not feeling quite as complete as some of my other efforts. I remember being pissed that she would dare say such a thing, even while knowing that to some degree she might be right. The tracks I had made on that trip didn't quite stand up over time as well as others I had made before or after.

Reminding myself that she had never made a single piece of music and asking why should I even listen to or care about her opinion on such things only went so far, particularly as there was some truth in what she had said, though she was never quite known or loved for that quality.

Maybe she was just not the right woman for me. Time, it seems, would support that claim over all others.