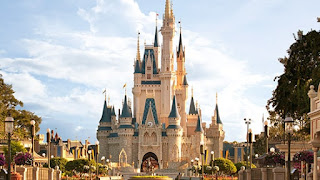 That's right. July 10th, 2017 - Disney Orlando. It will be hot, it will be crowded, it will be expensive. This is a Florida summer. Well, the expensive part will be somewhat mitigated by the generosity of a couple local friends. They have passes that they can use to walk us in. Otherwise, there is a loan application that can be filled out for entrance, collateral that can be held or seized.

The kids simply love this stuff.

Well, in truth my nephew's mother told me the last time they were there they wanted to leave after an hour. I am hoping that is not the case today. My son believes in the magic of Disney far more than he does that a man named Jesus ever made any feature length animation films worth watching. For the boy, the illusion is complete and vital. It has been almost all that he talks about.

Jesus has a branding problem.

Yesterday evening, again, we met up with a few friends at a local sports' bar. It was very nice to see so many of the old crew, to see that they all turned out as you would hope. I mean, that they are all okay. The kids are alright. They're in their 40s and 50s, but they're all alright.

I should not spend much time here writing. The boy is still sleeping but once he wakes up it will be a race with the clock and with the the central artery that runs from Tampa to Daytona, Interstate-4. For anybody that knows this road, there are few things less pleasant than commuting it. It is a heresy of urban planning.

I almost wrote "an heresy."

Okay, Space Mountain awaits. There is the commute to consider. One must always rush to arrive early. There are lines that do nothing but wait for you, and they are everywhere you look, every direction you wander.