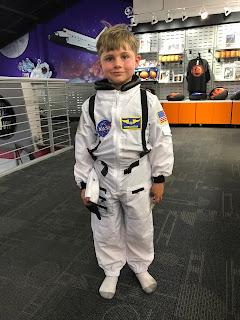 I haven't gone through any of the pictures in my cameras since Disney, where I only took a couple. So you get an iPhone pic, one I took for and sent to mom. Yes, I bought the boy the astronaut suit. He could not have been happier about it. We left the Kennedy Space Center and our visit with my brother and his boys to come south to Melbourne. A couple days at the beach visiting friends and then home.

We stayed up a little bit later than normal last night, playing. Three boys - two five year olds and one ten. I think he's ten. The family is comprised of old friends from Miami, then New York, then Berlin, then Florida again. The beach. The drive south from Kennedy Space Center along Florida's A1A was quite a reminder of what Florida beach towns can be like, an incredible disparity between wealth and the type places that exist just above the point of desperation, natural beauty and the abandoned buildings of failed dreams. It doesn't seem possible that that many businesses could fail and nobody would bother to take over or buy the buildings they once failed in - miles and miles of collapse and decay. All that it would take to convert most of them into crack houses would be more people and fewer cops. Multi-colored foundering and rot.

Then just on the other side of that, the lovely and lengthy Atlantic. Today, we will go swimming in the ocean, the boys and I. We will walk to the beach, we are that close, just a bag of beach necessities - sunscreen and towels - dressed in shorts and flip-flops.

We're not supposed to say flip-flops any more. I have come to understand that it is a pejorative towards native Filipinos, though I find that hard to believe. I suppose it is possible. If Americans can somehow make a slur by naming something simple and commonly used then you can pretty much count on us to seize that opportunity. We sure do love our freedoms.

Sandals, I suppose would be the better word to use. But somehow sandals do not seem to describe the thing as well as the term flip-flops. I hope I never get into politics, because I am sure to flip-flop on this issue.

The visit with the boy's cousins and uncle went very well. They were all good kids together. It was sweet to witness, kids being kids. It is too bad that all people can't find common ground as quickly as children can. Give them a subject, almost any subject, and their imaginations start fleshing out some scenario - Spiderman always vanquishes the villains, Batman employs devices to do his metropolitan goodness. The world is filled with heroes and villains. They're not entirely wrong about that. I try to assert some ambiguities and nuance into that imaginative world by offering that each might have decent and indecent qualities. Batman is a misanthrope, for example. It's why he is my favorite. Who doesn't love the occasional heroic mystery?

So yes, they were all good kids together, but being around kids non-stop has worn me out a little bit. A child's emotional world too closely resembles my own and I must fight for attention where it all used to come so easily. Now, I must find inventive ways to outdo them when it comes to having my emotional needs satisfied or satiated. The deck is stacked against me, as the banality goes. But I don't mind. I have much clemency when it comes to defeating children in the battle and subsequent victory of having my emotional needs unfairly weighted in my favor.

No. Having a son has made me a better person. Perhaps I am the wrong person to make that claim, but fuck it, what am I supposed to do, wait for others to figure it out and then tell each other? That could take years, or more. My son could be a teenager by then, when all bets are off in the accelerated hormonal sphere of hackneyed phrases, met by the impending tired cliches of age.