Life is short, and a terrible tipper 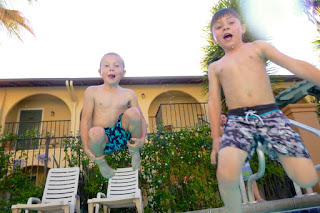 I never thought I would say this, but: I love boys. I mean these ones ^^^. They are tremendous fun, just look. They're really good kids. They make me laugh. Being young seems nearly indistinguishable from being in love, except that it does not force the question, What does all of this mean?

Why does adult love always have to mean something? In that way it posits itself as an antithesis to the feeling of youthfulness. Youth is unbridled love, unburdened by prescience.

So far, I've only seen my son be afraid of a few things: imaginary fears, me being unhappy, or legitimate danger - in that order.

Burning Man might feed off of people that don't have children in their life, or people that don't yet know what to do with them, or those that see children only as some sort of "tribal burden" -  non-radical-superficial-self-reliability-ishiss-ness-issues. I have never before heard so many people cite the supremacy of "self" in an environment that, if unstructured, would take their lives from them as if it was they had never been invited to it.

I mean, I get it - the claim is that this unique power arises from togetherness - but don't call that freedom. It's encouraging and mitigated safety, at best. The distinction between being invited and being lured to an event is lost. Everybody's a star when the skies have fallen.

Kids are very selfish, but they don't do drugs that I care for, so you get all of the engagement without most of the burden.

Real drug users will refine their behavior such that they appear before the intoxicated mind as the most refined children you've ever met; beautiful in their innocence, but unpredictable in their experience.

If it were legal then I would sell $600 tickets to my apartment every week, just so that you and your friends could dress up here in costumes. I could play loud music, my son could throw dust in your face while laughing at you, but also sending love in the cosmic dust sense.

Think about it, dear readers... What would you rather do: spend a week wandering around the desert, or wear my son's underwear on your face and pretend that you're fucking Batman?

Well, this business plan will have to be run by Mom before it takes flight or jumps naked from an airplane onto a lakebed with a parachute shaped either like a titty or a penis head, but you get the idea. If you want to feel free, just jump into a pool with kids. It's really something. If that doesn't work, then you have real problems - the playa is your Gaia.

Even the most joyless among us must have a weak spot where the chlorine sometimes gets in. You can see it in the corners of the eyes. Swimming in a pool is either the greatest thing ever, or just a portal into the demons of bad Renaissance-era art.


Renaissance-era. I love that stuff.