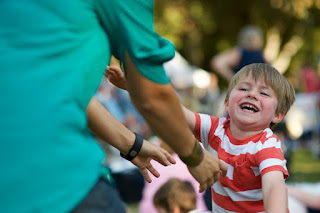 An invitation to go to a party at the square arrived via mouth yesterday. So, the boy and I packed up a bag of popcorn, some paper towels, a bottle of wine, the camera, and headed towards a stage of aging rockers. Once there, we found families of kids and one half of the parents - almost all moms - lounging about and enjoying the ending day with music as a center point.

An all female choir group did a semi-erect version of Stevie Wonder's "Higher Ground." After that, each song faded from one into the other, perhaps trying to hide itself. Nowhere in that song does it say, "People, keep on pushin'…"

It's just not part of Wonder's message.

The evening was a success, though. I need to get out and do more with Rhys, let him play with kids his own age. He only has me, and while I often match his maturity level, I know that he needs kids that can run as fast as him without breaking a hip.

My new romantic interest pointed out to me that I'm the oldest man she's ever been involved with. That's always a nice thing to hear. I win! The honorable prophet Elijah Muhammad would consider her too old for me, but what can one do, I have not even yet converted to the Islamic practice, much less faith. I sit on the fence between all religions, afraid to put my foot down.

My girlfriend is making me clothes for Burning Man. It had better be a series of assless sequined chaps, but I'll leave that entirely up to her. I like to sleep face down at Burning Man. It's the only way that I can relax.

Aren't we already just too cute?

I don't care how many readers this thing costs me... I like this girl. I'll be gushing for some time about her.

Get used to it... I feel as if I'm being tickled; can't stop giggling and wouldn't want to get away. 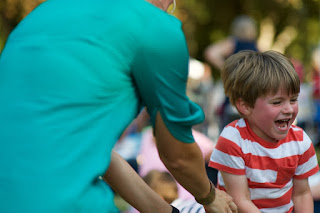