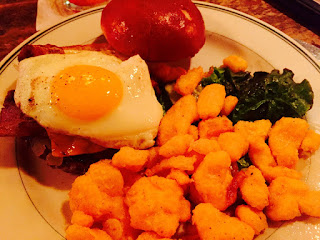 Well, I made it to Madison, spiritual home of the fried cheese curd. A thing which I tried again last night, just to be sure. I went to a place called "Old Fashioned" where they unsurprisingly and unironically specialized in making the "old-fashioned." They do it both the old and the new ways. I had a bacon cheeseburger with an egg on top that I couldn't finish, and as many fried cheese curds as my silly conscience allowed, which was about twelve. One for each disciple, and in double honor of my two favorite commandments: the one about not coveting your neighbor's oxen or slaves and the other one about not letting any other gods walk before yours.

I walked from the hotel to the governor's square where Scott Walker hopes to conquer the mind of America. He does not seem to be particularly adored here in Madison. One wonders how he has been voted into office. I suppose the state is large. Nobody here in the mini-metropolis of Madison seems very impressed with the fact that he pulled himself by his own bootstraps and managed to obtain a high school degree without anybody's help. I have touted his educational victories since arriving here, just to see if I can find any challengers to his political legacy.

Best governor of Wisconsin to not have a college degree… and still, to achieve all that he has… He's a real thinker's thinker. How can you even argue with a guy like that? He's got gumption, and he's got my vote!

His political pedigree is unsullied with intellectual formalities of any kind.

But alas, there were no argument takers. The people here are far too nice for any of that nonsense. They just look at me as if I'm suffering a stroke, offering to get some help, a glass of water and a comfortable place to collect myself.

I kept asking, Now, is he the same guy as that Rick Scott fella', or is he a different guy? He's not the gay one, is he?

I would slap the bar, laugh out loud unexpectedly, burp, then demand to have another one of those Old-Fascisms!

Somebody will shoot me before I am able to leave town on my own. They might let me go with just a grazing, a semi-permanent limp.

My entire dinner came to $29. I could live here for months, just on what I have in my pocket.

I walked back to the hotel while the sun was still up, setting across Lake Mendota, and took an iPhone picture through the screen, which resulted in mostly screen.

My evening was much more pleasant than I've been able to convey here this morning. I'm too lazy to go get coffee, or take a shower. I'm waiting for the world to wake up and am in one of those time zones that is neither the east nor the west coast.

They claim to be in Eastern Standard Time, but somehow they're still an hour behind NYC and two ahead of SF.

I blame that Rick Scott fella', the gay one. 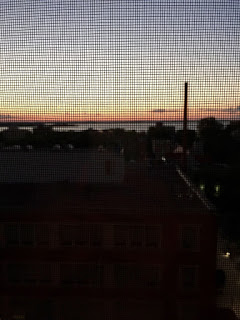