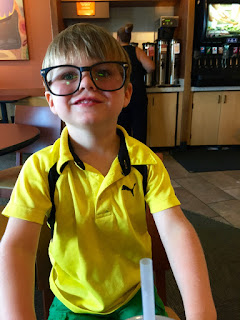 The weekend passed far too fast. They often do. Unless you're alone, of course. Then, a weekend might pass like any other two days.

We had a suburban time. We ate lunch at Panera Bread, the Starbucks of sandwiches. The boy seemed happy enough with his Mac-N-Cheese. I swallowed my culinary regret in small, dry bites. Then, we went to the Macy's Furniture Store. I have needed a bedroom dresser for some time. The pile of unfolded clothes on the floor against the wall where a dresser should be has begun to speak to me.

Modern furniture is all crap. The fronts are made of wood, the backs are particle board. I couldn't spend a thousand dollars and honestly look myself in the vanity of any of them. I want a waist high dresser with a mirror and am willing to pay for it, but I want all wood.

Target. There were things I needed. I encouraged him to run crazy in the toy section, picking out some colorful plastic that he developed a seemingly immediate attachment to. He found a Batman belt and mask, and also about $100 worth of other rubbish that he simply must have. It was like watching somebody on a bender.

Kids don't know how to shop. They just want what they want. There is little dissuading the convinced mind - it sees and feels and it knows. I was trying to direct him towards other toys, there were so many, but he had latched on to his preferential choice and seemed quite happy with his decision. So, I was happy for him.

He proved to me once and for all that "Batman has a sword!" He had been making this claim for a while and, sure enough, there on the racks at Target sat a plastic Batman Ninja collection that included a sword. I had been telling him for weeks, "Buddy, I've known Batman for a while and I just don't think he has a sword. I've never seen him with one."  I was, of course, very wrong, and I should know better than to argue with the informed.

He begged me to buy him the Batman Ninja Sword, but I couldn't do it. All of the stuff in that set were weapons. I explained to him that weapons are only used to hurt people, so we can't have that. He retorted that, "Swords are used to hurt the bad guys!" Smart kid, with a quick mind. I assured him that we were in no immediate danger from the bad guys, and that too many times swords end up hurting the good guys also.

He was running around in the store with the Batmask on and I kept calling out to him, "Batman!" At which he would take off the mask and say, "No Dad, it's just me, Rhys-boy."

I told him, "Batman also shops at Target, so it's an easy mistake to make." He took my claim credulously, peering around as if at any moment the Dark Knight would appear there in the Tupperware section, prepared to handle the villains. The boy seemed willing enough to assist in any super-heroing that needed to be done.

The day was a mild success. China will keep sending over toys, at least if the boy and I have anything to say about it. One wonders what the Chinese children making the Japanese Batman Ninja collection for the purpose of sales to children in America must think about such things, if at all.

It's impossible not to recognize how brief these days in his life will be. In another few years he will have moved on from this to some other fantasy. I try to breath it all in deeply and remind myself that these golden years are as transitory as they can be, a weekend stretched across a season, then gone.

He came home and ran through the apartment courtyard dressed as his version of the heroic bat. I could detect within his stride a strong belief in flight. So, I sat and watched, and believing is what I did also. 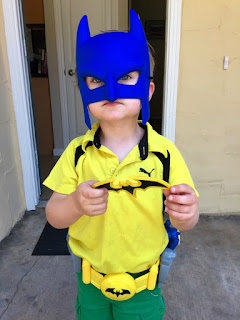