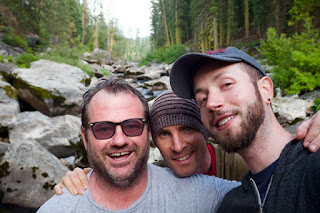 (The truth of us)

Home again. Getting away is one of the many tricks of life. It is too easy to be glum when sedentary, stationary. Adventure is what calls.

I will set up the tent and camp with the boy sometime soon. Just in the backyard, but it will give him a taste of what it is like. There are still some adjustments that I will need to make. The air mattress that I have is not big enough for both of us and another one that same size will not fit in the tent. I will need to either buy two smaller ones or one larger one. The tent that I recently purchased does not do nearly as good of a job at containing heat as my older Eureka did. It is more of a summer tent, for warmer climes. The boy and I will need sleeping bags to compensate.

Always, there are corrections needed to life. Adjustments.

That was the simple lesson learned on our camping trip this weekend; the joy of struggle; roughing it, as they say. It works, though. A short step outside of oneself is all that is required. Male happiness is not such a mysterious thing after all. An open fire and sleeping on the ground. Who would have guessed?

Cato accidentally threw away a bag of my camping gear, all small stuff though articles I had wanted to keep. I can see how it would have looked like a bag of trash - bags within bags, half opened containers, chaos. I will go to the camping store and see if I can find a more suitable long-term solution than a plastic deli bag, a smaller bag that can fit within my military duffle bags. He denies this of course, but the facts are lined up against him.

Young people, what can you do about them, really?

He lost a $100 bet about whether or not Cat Stevens wrote and sang Cat's in the Cradle. I was certain that he did not and Cato was certain that he did. Ugh, I just tried to listen to that link and didn't make it through the first verse. Cat Stevens, to my memory, was never so maudlin as Harry Chapin (whose name escaped me during the bet, luckily).

Cato established a pattern of error in judgement which supports my theory of the thrown out bag of camping gear. Now, he owes Rhys $100 in toys or adventure. That was the only way I could get him to take the bet, to make the loss somehow a victory also.

We got rained on, heavily. We had just returned from a hike to the local waterfall and put a tarp up. All the signs were pointing towards a storm's immediate arrival. We stood there underneath the shelter and ate cheese and crackers and drank beers and laughed at the regular absurdities of maleness.

About 30 minutes into the storm the hail came. Lots of it. It pelted the tarp and the drop-cloth we had arranged to defend against the skies. Pieces bounced off of tree stumps four to six feet in the air. It was really something.

We eventually retired to the largest of the three tents that we had set up and drank a bottle of wine and played the guitar, awaiting the storm's departure. Listening to the thunder likely move South, though it sounded as if it was heading northwards. The receding grumbles and the time between them giving us indication of its passing.

There was the communal making of dinner, of course - beans and vegetables and chili, all mixed together and served in bowls - then more of the guitar playing and the telling of stories.

Always, there is the open fire and the telling of stories.