"Little puppet made of pine, awake…." 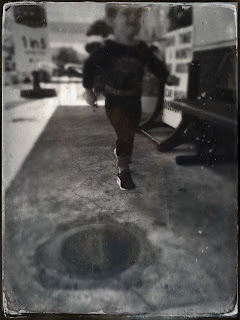 One or more of los ninõs de la barrio came into my apartment yesterday, stole a baking sheet, and then turned my oven on. It makes no sense, but children are unburdened by the requirements of logic. I had to piece the evidence together to come to this conclusion, but now that I have arrived at it no other explanation quite satisfies the evidence. Accusation always scratches the right itch.

I thought that maybe I had just misplaced the baking sheet, but it is far too large and I had looked repeatedly in all of the places where it might have been. It's entire life cycle - from use, to cleaning, to return use - occurs in less than a one hundred square foot area.

I don't mind if it was a few of the silly girls, but if I find out that it is any of those mean-eyed little boys then I will have to beat their unlucky asses to a pulp. A frenzy of unexpected and uninvited violence. Gringo-Power, etc. It's a territorial thing, and I must speak the brutish language of territory. I put a Puerto-Rican flag on my front door to gain their trust.

With the girls, however, I would invite them in and have them bake me something. It is the new feminism which I have embraced.


I read the boy stories before he goes to bed and have used this time to perform an unstructured analysis of international culture. With very little evidence to support my claim I have determined that the Italians are almost as fucked up as the Germans. Pinocchio is some twisted, dark nonsense to fill a child's head with. If you have not read this story, or even an abridged version recently, then do yourself a favor and do so today. There are some demonic things going on there.

I should be more careful.... I have loosely used nationalities here as the easy descriptors that they are, adopting and shedding them for myself without sufficient documentation, nor approval from the respective embassies. If I am not careful... then the readers here will think me indelicate, or even worse.

However, the story of Pinocchio is a monstrous, dangerous, perverse, and stupid series of things to tell a young child. The boy simply loves it. I explain that a marionette is just a possessed harlequin arranged on sticks and strings like a Blair Witch that has escaped the forest.

I offer that I would have left that old creep Gepetto in the whale's belly for all of eternity and that Jiminy Cricket is fucking useless, best dealt with through insecticides.


Who tells children that starting fires is an act of heroism that will somehow please their fathers?


Pinocchio: Are you my conscience?

Jiminy Cricket: Who, me?