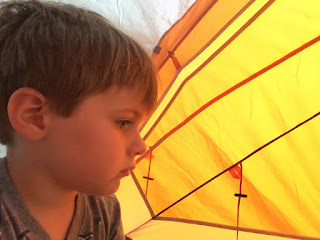 I wouldn't describe our camping adventure as a complete success. We'll need to scout another location. Out of convenience we used the ex's backyard. It is wide open, surrounded by trees, has access to a bathroom, and also has a creek running through it on one side, all of which approximates many campsites elsewhere. It was the access to the bathroom that became our undoing. Sometime after 11pm the boy woke me up to tell me that he had to go potty.

Instead of just having him squirt pee in the backyard as I should have... I led him inside. The problem was that Mom was home. She heard the sliding glass door open and asked down from upstairs who it was. The boy heard her voice and that's all that was needed. I spent the rest of the night sleeping in the tent. The boy went upstairs to his bedroom.

It's my fault, of course. I was just trying to familiarize him with how things work. I suppose that I accomplished a little bit of that, though he and I waking up in the tent was meant to be a part of it; the novelty of unfamiliarity, the trust that dad can take him places and he'll be alright, being out in the elements, etc.

I don't mind sleeping in a tent. I like it. The air mattress and new sleeping bag have made the experience not so very different from anywhere else. I was warm and cozy. I slept more than usual, about eight hours, which is probably a record for the summer so far. In short, my sleeping situation for camping is nearly complete. It has cost me close to a thousand dollars, but I doubt you'll find many people who have any better situation for sleeping outdoors. My tent was designed by the Ritz-Carlton, etc.

Now, I sit downstairs at her house writing this, drinking a cup of her sugar and cream and coffee that I made for myself, looking through the mail that has accumulated here for me (which included a check for over a thousand dollars), wondering if she still likes to have sex first thing in the morning, half asleep. Not that it matters. I am curious about most all things, with concentration on areas of specificity.

I must assume yes, she does, without there being any substantive proof to the contrary. The only available evidence is that she does not enjoy having sex in the mornings with me. This is not very useful information, statistically. It functions more in the civil and interpersonal realms than that of statistical mathematics. A negative sample of one gives rise to the question of discernibly useful outcomes.

Well, now the challenge is to break the tent down and get the boy out of this house to prepare for our sailing trip on the bay. I don't suspect that will be entirely easy. We try to avoid circumstances in which he is with both of us and then must be separated. It has proven to be difficult, situationally, in the past, one not short on emotional stress. Try separating a boy from his mother and tell me how you feel.

I have moved on to my second cup of coffee and noticed a bottle of champagne in the refrigerator.  She has purchased a piano, an upright, presumably to replace the one that I moved to my place. It is, in part, to replace me also, as I was the only one who played it, at least for others. There are beginner practice books on top of it, though for whose use they are intended I do not know. My guess is the boy, though I did once come home to hear mom practicing scales.

I picture myself finishing off the bubbles, directly from the bottle, playing one of my favorite songs, singing along at what is intended to be an acceptable volume. I do not image that my previous musical charms would be received in quite the same way now, though. Such a thing might be met with derision, or even crossness, though I am accustomed to that, even somewhat impervious to it.

Well, they just woke up. She and I are estranged, neither of us even bothered to say Good morning to one another, which doesn't surprise me at all. I question if I like to have sex in the mornings any more, either.

Now have a seemingly useful statistic: 100%.