They're still working on the "Quality" portion of this franchise 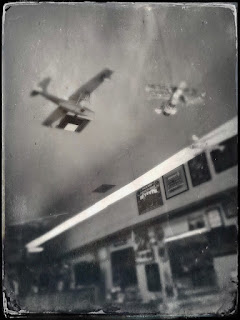 My trip to Madison is not going as smoothly as I had hoped. Not yet, anyway. My flight out of SF was delayed, so I missed my connection flight through Denver. The overworked United employees did what they could to route me through Chicago this morning, but that option barely improved my time for arriving in Madison and risked more delays.

I awoke at a Quality Inn after having eaten dinner late last night at a Denny's by the interstate. I skipped over the cheeseburger / patty melt pages and opted for what they described as an Alaskan Salmon. It arrived somewhere at the uniform point where pink and grey intersect, as if too many watercolors had sat together in a cup. Aridness and moisture were fighting their respective fights on the depressing battleground of some dead fish. This particular animal might best have been described as brackish salmon more than Alaskan, though I do not know what rivers flow between Denver and the Alaskan coast which would allow this Denver Airport Denny's to be the lucky beneficiary of it.

At least there was wi-fi on the plane. I was able to converse freely. That's all that I wanted: to have access.

I just went downstairs and had the "complimentary" breakfast. The only thing it was complimenting was a trash bag. It didn't taste much different from what I would have had at Denny's, it only cost me five dollars less. I've never had the feeling that any food I'm eating at Denny's came from the state I am currently eating in. Even if it were available it seems that it all arrives in a proto-frozen condition from at least two states away. I wonder if seeing a Denny's 18-wheeler rig makes other truckers hungry. It seems that it must, if Pavlov is to be believed at all.

Soon enough I'll be at the Denver airport, where all fine dining finds its center and flourishes. United  Airlines gave me two meal vouchers. When I looked at them this morning I noticed they were for $7 each. They want you to eat, you see, they just don't want you to be happy about it. Precisely what they are vouching for remains an indeterminate mystery.

I spoke with a friend last night and he cautioned me not to make any sudden or sweeping decisions. He could hear the newly formed enthusiasm in my voice. He is a good barometer for my moods, a stable friend if ever there was one. He reminded me that I married Rachel after not having spoken to her for three and a half months, that I had ceased speaking with her.

Just imagine what you might do with somebody you barely know… The possibilities are endless, but the tragedy won't be.

He wants to keep me safe from myself. I wished him luck.

Well, I have been looking at the clock on my computer, which I forgot that I had set to not change based on time-zone, for reasons that indicate a laziness of mind more than anything else, and I just realized that my phone is now stuck one hour in the future and I am in the middle.

I feel as if I have jet lag on a daylight-saving time morning. I've lost more than just a single hour, I'm sure of it. Traveling west will not ever bring those hours back again. If I stand still here in this hotel too long then the past is likely to catch up and overtake me.