The Halves and the Halves Not 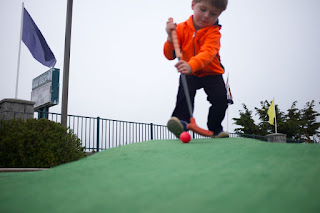 A family could spend a full afternoon doing all there is to do in this town. Again, I have no idea why I came here.

After Walmart's Burning Man yesterday we came back to the room for a bit and watched the Cartoon Network (line of the day: "The more you know, the bigger bummer you are") and then went over our remaining possibilities to exhaust this town of its usefulness.

Putt-putt golf and pizza it was.

Rhys did not have the patience for the traditional and time-tested techniques of miniature golf, so he created a sport that was similar to land hockey with a ball. The object was for him to get the ball in the cup before me, which he did on every hole, even if it required using his hands, or kicking my ball into the water. He squealed in delight and victory, reminding me 18 consecutive times that he won. It was unanimous. He had won his first Open.

Afterwards, we drove the Grand Prix and then I taught him how and why to use a gun to kill soft animals. If only his mother was here to express her pride and gratitude. 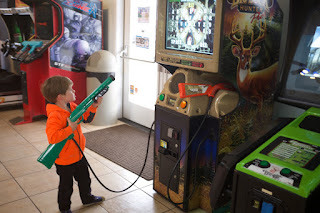 No, he tried to play the hunting game, but I wouldn't allow it, being a liberal. I know the picture shows that he got the high score and it's prompting him to enter his initials, but I swear that the player before us just left it like that. Rhys had just run over and grabbed the gun. I do question where he learned to pump a rifle, though.

I'm being truthful. I have no idea where the kid learns these things.

If I wanted to teach a 3 and half year old how to use a rifle I'd do what other responsible fathers do: take him to a gun show and hand him an automatic weapon. What could possibly go wrong, America? Our forefathers mostly died of old age so that we could have these rights.

After all that, pizza; half cheese, half pepperoni. This simple arrangement took me three attempts at explaining. The girl taking the order kept saying double-cheese because I made the mistake of saying, Well, we want cheese on the pepperoni side, also… She never quite recovered from that verbal trick. She's probably still drawing circles with a line down the middle, trying to do the math. The place was called Round Table Pizza, so she's just trying to derive pie, the ratio of its circumference to its diameter.  I had to finally cancel the order and re-order it as: half pepperoni, half cheese. That was the only mathematical language that worked.

The phrase full cheese with half pepperoni somehow kept getting translated to double-cheese, no matter what I did. There are no whole numbers in all of Fort Bragg, only fractions and multiplication. A little bit of knowledge is a job requirement in a dangerous place. The vetting process must be brutal for a position like that. The front lines of pizza at the farthest edge of the final frontier.

Then, we did just as we promised, the biggest bubble bath in history. The front desk had a $10 full bottle of the stuff and we used every drop. It was absurd, pre-school paradise. Neither of us wanted to get out. There were so many bubbles that at one point we drained the jacuzzi and refilled it and they were still flowing over the sides. Best $10 I've ever spent, and that includes the pepperoni half of that pizza with all of that delicious cheese. 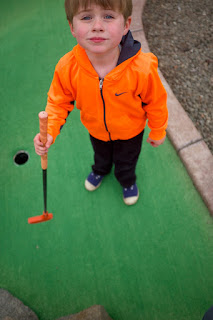