Time Flies when it has a Scooter 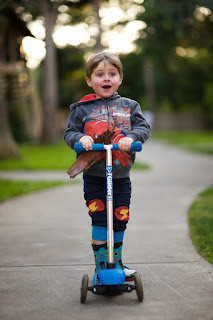 We never made it out on a boat yesterday, so today is the day. I've checked the schedule and we're set. I fear that he will become bored with it rather quickly and we will have the remainder of the journey there and then the longer journey home, but what can one do. The boy has it in his heart to go on a boat with his dad.

Who could deny such a thing.

Yesterday we intended on going shopping at an outdoor mall near San Quentin, but he fell asleep, so I just kept driving toward the city. We picked up Cato and made our way to Golden Gate Park where a friend was having a birthday party. It was a lovely day everywhere else, but once in the city the temperature dropped twenty degrees and the humidity climbed. The boy had to borrow a hoodie from the birthday boy. He was a little Ben Kenobi. 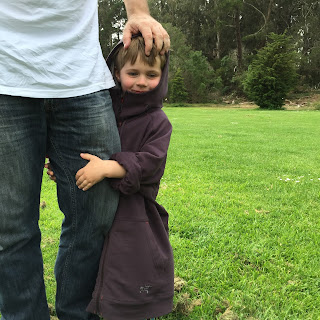 I am finding myself becoming more and more protective of the time I get to spend with him. He is reaching the age where he really needs his dad. It is perhaps the most hackneyed of all the parental cliches, but the time really does fly and each moment should be cherished. You never get a single second of it back. Oddly, splitting with his mom might not have been the worst thing that could have happened. My relationship with the boy has become so simple, clear and unobstructed. Not that she was intentionally interfering. It's just the dynamic of the thing.

It has been a very long time since I have felt so loved, needed, and valued by anybody. One gets so used to being told in subtle and not so subtle ways that they're somehow not good enough, and undeserving. When you step back from that lie, even a short ways, you can't believe that you ever suffered it, and even called it love.