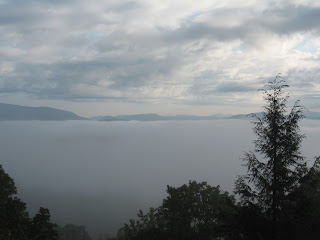 One of the few times that I get to listen to albums is at the gym. This morning, The Cure's "Faith." It's been on my iPod for months and I've scrolled past it about a hundred times. It has always seemed too much of a commitment, too brooding and morose. Tough times call for moody music.

With each listening of this album, about once a year, I am reminded of a sudden trip that several of my friends took from NYC in October of 2001, less than a month after the attacks.

America's intention to invade Afghanistan had been made. I reasoned that if the terrorists were going to strike again then this is when they would do so, and New York was the place. I spoke of chemical warfare, possible suitcase-sized nuclear devices. The implications were clear and ominous. We made our plans to load up in an SUV and escape. We discussed it vaguely then specifically over a Moroccan dinner of hummus, falafel, and lamb. There were six of us that I remember. Two couples, two singles. My buddy and his girlfriend, myself and my girlfriend, a photographer and a friend that helped manage the booking office at the time. Two of us were what would be considered and handled by the agency as artists.

We made no real plans. We just drove south. Terrorists would hardly care what survived in those desperate lands. There is no need for an apocalypse in such a place. Never more than a couple steps from becoming a living re-enactment of Mad Max, the south invites its own decay.

The first city we stopped at was Washington D.C. Terrorists would never think of hitting there. We laughed about our strategy grimly, we pushed on. Wouldn't the people of NYC feel stupid now, or soon.

We headed towards the innards of the country.

I got a speeding ticket in Virginia, 90 in a 55 zone. The officer explained that I would have to appear in court on the date listed. I explained that I could not. He offered to take me to jail instead, to iron things out with the judge in the morning. I looked him in the eye and promised that I would appear in court. I would be there, you can count on it. A phone call later solved the entire issue handily for just under $300. Those were in 2001 dollars, of course.

My buddy called his travel agent and we were made aware of a resort that would be the best place to hide. Little did we know precisely how right we were at the time.

My girlfriend, Camille, aptly described the hotel's interior decor as the inspiration for several late Tom Petty videos. The entire place was a farrago of exploding colors and confused decorative ideas, all forced to exist together in what otherwise need not be cramped spaces. The eye never gets to rest, the mind never finds its center. It is the architectural equivalent of a flashback. What is meant to express a southern regal air instead perplexes the guest, inviting comparisons to a botched life-sized wedding cake made by an overzealous baker, one likely addicted to a specific opiate. 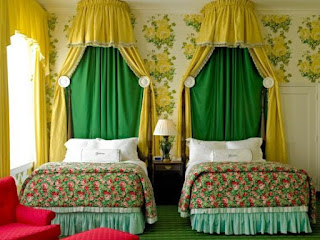 We stayed only one night. It was much more than any of us could stomach. There was a bowling alley in the basement. Room service. Drinks. My buddy payed for it all. It must have cost thousands. The sting is perhaps still being felt.

We continued to escape the ravages of impending terror. We headed towards Asheville, North Carolina. This is where my girlfriend's mother was. Camille was originally from New Orleans, though her mother had a place in the mountains. I can't remember if this was the first time meeting her or not. I think that it was. She met us outside the Brookstone Lodge where we would continue to flee.

The place was enormous, and built entirely by Keebler Elves: 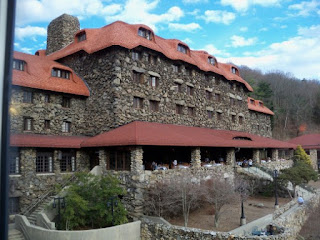 We were all becoming good at sidestepping doom. It started to feel quite natural, this spree of victories.

We drank wine and went swimming in the heated pool that night. The office manager in her bikini started flirting with my girlfriend in hers and for a few successive moments I thought that they just might get it on.

But, the audience and attention they attracted in their flirtations confirmed that it was, alas, not meant to be.

The next day we awoke and decided to drive the Blue Ridge Parkway. The day was uniformly overcast, and gray. We stopped at a used cd place and bought a few cds for the drive; Neil Young, Roxy Music, The Cure. Nobody else seemed interested in Roxy Music so we started with Neil Young and then stuck with The Cure's "Faith" on loop once we had settled in to the driving.  We wound our way up into the mountains, smoking pot as we went, something the office manager had made sure to pack. The memory for me is imperishable.

The winding, empty roads, the haze of the pot, the grey clouds moving across the face of the mountains and across the meandering path before and behind us. All silent as we climbed. The pace of the music and the mood of the view expected it.

We rounded a curve in the road where the crevice of the mountain created a fold in which the wind rose steadily from below. There, held aloft without effort was a raggedy blackbird, perhaps a crow. Its tattered wings outstretched, flapping loosely in the winds without effort or motion from the animal.  Hung as if in a suspended crucifixion. The car slowed as it arced past, silently we each turned our heads, transfixed by what was coming together before us, and within us; escape. 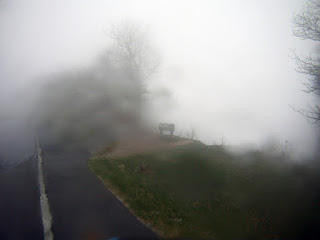