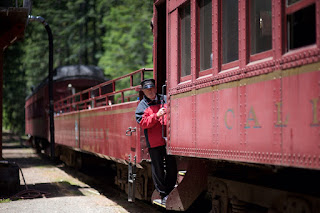 … and ride the train we did.

It was quaint fun for those who gravitate towards such things. It had its charms. The boy sure liked it, most of all when we would go over bridges that traversed little rivers cutting through the hills. He would excitedly declare that he could go into the river if only we had brought his Thomas the Train boots. They are rubber "wellies" and he knows that they are designed for puddle-jumping and all manner of things water and/or mud related, particularly exploring and jumping in.

There wasn't much of a destination involved in the ride, just up into the hills a few thousand feet in elevation, about 25 miles in switchbacks and stretches of curves, to a camp outpost where they sold lunch and roadside junk. Or, stuff that would get sold as roadside junk if it were not beside the tracks, but instead at a privately owned log-cabin gas station beside a state highway.

We sat at a picnic bench and chatted. I asked if he was having fun at the outpost stop.

This is adult fun, Daddy.

Only for certain types of adults, buddy. 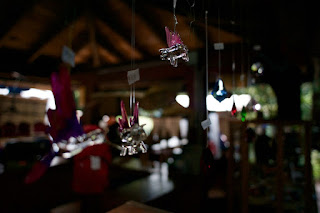 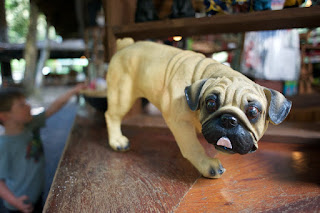 There was plenty of homespun wisdom to be had from conversations overheard:

On the train and at the stop there was a guitar player who paced back and forth singing songs about riding trains. He liked to claim that all the songs he knew were a hundred years old or more, but they were not. It only took a dollar each to get him to sing City of New Orleans or 500 Miles or The Train Song, an old personal favorite.

He didn't know I Often Dream of Trains, at which point I coincidentally ran out of dollar bills. 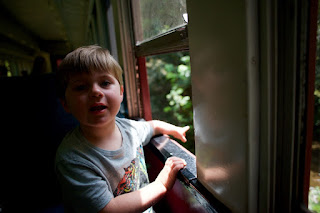 The boy seemed to like having the window open and watching the trees pass. I had to be at constant alert to make sure he didn't lean out in excitement. He knows that he must sit on his "bum-bum" at all times in these situations. A fall from a train window would be an unforgiving misstep in adventure.

I talked to him about logging and the gold rush of 1849 and what effect it had on people, and how some of the things we could see out the train window came to be as a result of those things. The West coast version of Americana, somehow both more hopeful and yet more desperate. 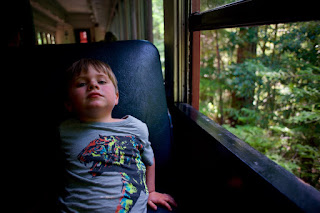 On the trip back he started to doze a bit. I pulled him up on me, putting my legs up on the bench across from us and then let him lie down face up along the length of my body with his "night-night," at which point he promptly fell asleep. It must do something to women to see a man care for a child as they all passed and looked down and cooed and gave exaggerated awwwws of approval.

It did feel good, though, that sense of trust and safety that I was able to provide as my feet fell asleep right along with him. He and I took a little longer to shape the relationship that we have, but it's up and running at full steam now, just a rollin' on down the tracks...