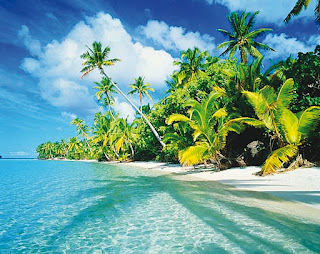 Day two in sultry paradise. I have grown far too accustomed to the lower humidity of semi-Northern California. Some call it a drought. Last night, I sweated entirely through my linen shirt. Luckily, it was all white so once it was completely drenched nobody really noticed, though women ceased hugging me in greeting and departure. I was met with waves of the hand, smiles of retreat.

Speaking of women... there was one. I felt the tug of attraction and enjoyed it. It seemed as if she was there to be noticed by me. That didn't take nearly as long as I had thought that it might. My impulses towards her were mildly problematic, though. She was "of a familiar type." A close friend not only noticed, but jokingly cautioned me not to call her by another's name.

So, I spoke with her briefly, confirmed that she was nothing like the previous type to which I am referring, and then proceeded to stalk her visually while she acted as single women often do at a wedding; dancing and looking good, having fun, appearing ready to act upon their fertility. I wished to chat with her more. She came back to the villa where we are staying, but there was only one brief interchange at the edge of the beach as she and her friends withdrew for their hotel. I was offering to be helpful.

Later, I was stricken with a reasonably mild case of the revenge of Montezuma, the traveler's affliction. It is impossible to state the precise cause. It could have been everything. I have lost all of the fluids in my body between this and the linen shirt. I will be hospitalized by morning if there is one available, somewhere upriver, deep in the malarial jungle.

Tonight, I will try to conceal my intestinal bacteria from the one to which I am inexorably drawn. Each abdominal movement warns me otherwise. I want her to wear the same dress from last night, but I am confident that she will not. Perhaps she will, at least, for me, do her hair in the same fashion.

I wish only to make her feel pretty, you see, and then to find out some more about it.