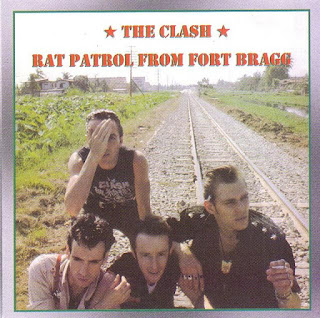 This morning, Rhys and I will depart on an adventure, the Skunk Train. We will drive north for a handful of hours then take a train trip through the woods, up into the mountains. I want the boy to become accustomed to traveling with me. Later this year, or perhaps early next year, I want to take him with me on one of my bigger trips, possibly NYC or Florida. I think he's old enough, or getting there. He travels with mom, so why not dad. Why not, indeed.

We'll drive up to Willits, then West to Fort Bragg. I've never been. The girlfriend that I mentioned yesterday was there recently and seemed to think it was worth seeing. I have always known that there are great adventures to be had North of here, all the way up the coast to Alaska. So, that's what we'll do, have more adventures.

She also agreed that "Combat Rock" was a better choice for album names than "Rat Patrol from Fort Bragg." It seems like a no-brainer, in hindsight.

A friend is in town to play an important party in SF. What a phrase, an important party… But, there is truth there. It is part of what he has dedicated his life to, and significant as such. I do not mean just for him, but for all of us that were part of that group, and others. The desert kisser will be going, and reached out to see if I would be, but my life calls me elsewhere. I am dedicated to kissing her again, at least once more. Perhaps each year at Burning Man. We'll see. As I said, I am in the market now for some new kisses, and kissing. And she has lips.