To gaze upon the shoulders, to consider the arch of the back 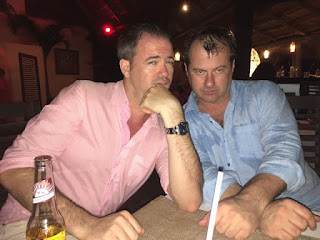 Well, the wedding was quite touching. It had all the things that you would want in such a thing. The bride and groom were both lovely and gave tender speeches, recited their vows sweetly and with much fumbling sincerity. The parents were glowing with happiness for their children to be departing on a life together, hopefully with children arriving soon. Their "first dance" as a married couple was quite impressive. The groom is a suave Argentinian and his wife a genuine and tender beauty, but I do not believe that many had expected them to perform a choreographed "Cheek to Cheek." Not the Fred and Ginger choreography that you see in that link, but a charming bit nonetheless. I knew the moves as they were doing them yet with each sequence I found myself more pleased than with the one before. I teared up a little bit with happiness for both of them.

Had I mentioned that I am here in Mexico for a wedding? The world now has two less singles in it.

The girl with whom I had developed a fascination the evening before wore the wrong dress, and did nothing with her hair to compensate. It looked as if she had stepped out of the shower, letting the ravages of nature be her stylist. I realized after a few minutes of watching her that I am well out of her league, which made it impossible to approach her. She is pretty and very much "my type" but I could not muster the insincerity to see any of it through, nor even try.

She chose a black dress that did little to compliment her, at least compared to the one of the previous evening. It was open and rounded at the top about the shoulders with a sort of funeral doily that hid more than it showcased. You could tell that she had breasts but it seemed as if you would have to work your way through a cotton cobweb to get to them. I suppose the idea was that it was to draw attention to her delicate shoulders, which were quite lovely, but that is the most and the best that could be said for the dress, that she would look much nicer out of it, as I'm confident she does.

The evening before, every pattern and line invited the eyes, encouraging them to linger and follow in consideration. Her entire six foot frame acted in unison as a series of on-ramps to much better places. She appeared as a woman, inviting in every curve.

Last night, she just arrived as any other attendee at a wedding. She disappeared into celebration.

Ah well. She never strayed far enough from her friends to be very interesting anyway. Few things are as off-putting as a lack of independence in any person. They were all like a four-headed wedding monster that became louder and yet somehow less noticeable as the evening unwound, or as they did. Everybody's faces started to sag a bit under the effects of perpetual tequila, even though they tried to stave it off with celebratory bursts at periodic, pre-determined moments. The light of the candle of their eyes were still well lit, though the wax had begun to drip a bit.

You could see the looks of concern if any one of their group broke free from the others. They danced in a territorial square that was meant to simulate a circle of sorts, and cheered belatedly at all of the familiar wedding disco moments. They were trapped in a world about two seconds behind the music, as if the soundtrack to the evening and the video had slipped slightly out of synch, never to meet again. When they would step off the dance floor they would grab each other's arms and then move like an eight-legged crab that had become slightly disconnected from its constituent components. Because they only ever faced one another they each got an entirely different view of the wedding at all times. It was like a fortress guarded by four poorly trained sentinels.

It was dispiriting, but what can one do? I would have offered a more interesting evening, though I suspect she might not have understood it. Still, she at least would have had a very good chance at sex, a thing that their locked-friend-formation seemed to be actively working against. I don't get it, once you've stared at a woman for an hour or more doesn't she know to break away from her friends to allow nature to take its course. She did not appear to understand the codes which encourage and allow the directed unfolding of a man's lust.

Some people you just can't reach.

There is still today, though she seems like a non-stop party girl. She's probably again repeating a story to her three connected friends this very moment, while I got a nice stretch of five hours of uninterrupted sleep, the first since I have arrived.

She would be a match, or no match, for me now.