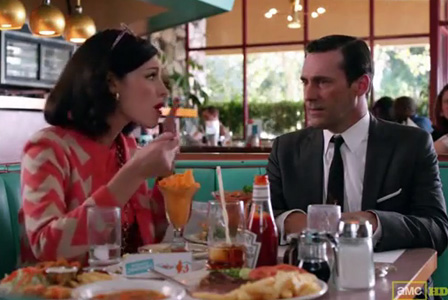 One night I sleep eight hours, the next only four, broken up in 45 minute segments. I feel as if I was beaten up by a mattress and two pillows. My sleep has too many commas in it.

I have become a late-night binge watcher of mostly older shows and series. Mad Men is my new favorite again. Last night there was an episode, coincidentally titled "Far Away Places." The writing in the show is enviable. There are episodes that I like as much as "Scenes from a Marriage" or anything else.

The show from last night charted the trajectory of two relationships both ending in tandem. Well, one of them ends, anyway. The other gets just to the precipice, the empty edge of darkness, but pulls back just enough into the shade, away from the light of self-scrutiny.

In the first, after a fun night of lsd-inspired revelations, Roger Sterling and his wife are lying on the floor together speaking their newly discovered truths. It was all part of the self-reflexive portion of "the trip," shot from high above.

The next morning he leaves her. She is confused, but he explains that he has seen his new truth and he must follow it. He seems quite happy about it all. Things suddenly became perfectly clear to him. He explains his revelation to his ex-wife, encourages her to try acid.

The episode ends with Don Draper in intense anguish and concern. He had abandoned his wife, Megan, at a motel, a Howard Johnson. There was an unpleasant argument about her only being an accessory to his life. He takes off without her, leaving her there in the parking lot.

In the car there are vignettes, memories of better times. Don whistling "I Want To Hold Your Hand."

He returns to look for her. She is nowhere to be found. Somebody saw her get in a car. He finds only her sunglasses in the parking lot. Phone calls are made to houses, offices, parents, all veiled so as not to reveal the real concern for her, for her safety, or for the loss of his sense of control. A cop wakes him up in the restaurant of the motel. He explains the situation. The cop promises to help. Friendlier times.

He finally drives home, to find her there with the house locked. She lets him in. They are both angry for different reasons. There is a chase and they end up on the floor, faces to the ceiling, just as Roger and his wife were.

"You just left me there. How could you do that to me?"

'"Every time we fight it just diminishes this a little bit."

The final scene, Draper stands in the conference room, a giant glass cage, alone. The other characters walk back and forth in front of him on alternating paths, showing little or no awareness of him. He sits still and watches as if viewing a life-sized screen of lives passing by on two different paths.

Roger Sterling breaks the moment, sticking his head through the door to the conference room, glowing with post-trip joy.

"I have an announcement to make. It's going to be a beautiful day."