Though nothing will drive them away... 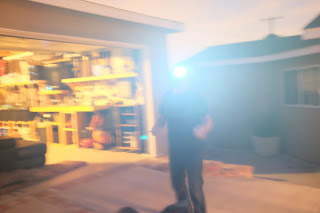 The man pictured above - it was the craziest thing - his face shone like a headlight. He must have a helluva damned time meeting new people: hung like a hobby-horse, face like a locomotive. He claimed to be the Illuminati.

I think I'm going to start my own "secret society." That seems like good, healthy fun. It will include the subset of people who read this site that don't want to either sue me or see me go to jail. We'll call it Le' Qre6istance (pronounced: Lake Resistance). I figure there's already as many as 7-8 people on board, or canoes... that is, not including spiders, web-bots and crawlers.

Actually, I want my secret society to be so exclusive that I've just expelled those last potential members. I am the secret society of one. My daily activities will include sharing my experiences here and having the government log them in a database somewhere. Then, I would prefer it if they taxed me to hire somebody to one day read these posts. This will justify my suspicious indignation. But if they don't, I would prefer not to know. Hence the "secret" of my society, etc.

The future is going to be more interesting. There are some who are quite dedicated to that fact.

Ah well, these are not quite our troubles this morning. We have a country that is turning on itself. People divulging classified, or top-secret, information in what we presume to be the best interests of the country, then seeking refuge in Hong Kong....

Many claim him to be a hero, and certainly that is one way of viewing his actions, as heroic. The "victim" of this crime would be the government, or "the people" as we're so often told. A crime against the people, it's starting to sound familiar. My guess would be that he thinks of himself as heroic most of all. Being on the run from a corrupt and dangerous world likely fits his model idea of self.


His actions are not entirely dissimilar from a spree killer's, when seen as removed from the content of the actual act itself. Meaning, a person who feels isolated, and maybe insignificant, decides to take a completely independent action - perhaps partially planned, perhaps not at all, though clearly not entirely thought out - but designed for maximum effect and damage, in the hopes of joining history and validating the feelings of hostility or disappointment they harbor internally. The action may have brewed for quite some time, fantasies emerge that suit the needs of the escapist. My guess would be that both actions arise from similar personal motivation: something must be done and I don't care about myself any more... I will be a hero of some sort, if just for one day...

One is portrayed as a radical optimist (or a cowardly traitor, depending on your particular sensibilities), the other, a deranged sociopath. In both there must also exist a taste for megalomania, fueled by a need for media validation. In both there is a substantial conceit of purpose. Yet each action, though vastly different in result, excites different people's minds in different ways. The ends they each seek are of celebrity or infamy, both announcing their acts in exceedingly different ways. One ex post facto, the other a bit more de facto. Both with the presumption of de jure.

This will bother some of my readers - among the Latins, I am certain of it. But that is why I'm here, and we can't worry about that this morning.


There seems to be a link there, or perhaps a meta-story. As long as the audience is filled with fascination or disgust, admiration or contempt, then the advertisers get their money's worth. The audience gets to choose between drive-thru feeling A, or online-order B, delight or scorn. One set of feelings becomes submerged and entirely private, the other freely shared on Facebook. Those are the main differences I see, in this one regard.

Many are demanding a full presidential pardon and certainly it is easy to see why: he has not yet been accused of a crime, nor has he stood trial. It always makes sense in these situations to put legal action before thought and consideration. I mean, this guy was an uneducated, low-level employee of a government contractor who obtained top-secret and embarrassing material and then turned it over to the media. What could be more deserving of a full pardon? Little matter that he may have sold the information and we don't know that yet. He deserves even more money, would say some.

That will anger my readers more than the other. I guess I am trying to thin out my secret society a bit.


There seems to me to be , at least among my peers, an overarching sense of hopelessness in the face of so much corruption. But perhaps that is not so among the younger generation that follows us. They are acting wildly about it. Maybe everything they said about "Generation X" was true, that we were all just lazy and stupid and mean.

But, it all might be true... What if compelling evidence exists to suggest some cogent generational sag between the baby-boomers and the next significant generation, Gen Y... and most of my friends just happened to be born in lazy times, like a bad Chinese proverb, discovered in a sugar cookie. The Freakonomics guys will one day soon determine that stand-alone Pac-Man games contributed to sterility and decay rates among brain cells. That, and Wikileaks.

There really should be a Generation Derless, so it could be shortened to Gen Derless by clever journalists and pundits alike.

Have they even bothered to determine Edward Snowden's inborn sex characteristics yet?


You heard it here first: Edward Snowden is an albino.