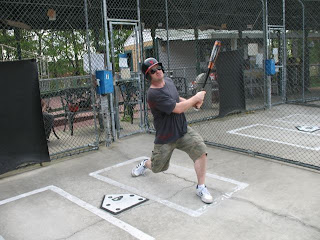 I joined a softball team, one formed at the local pub. It is what men my age do, I guess. Today, Rachel will bring Rhys and watch the game. I went to a sports store in the next town over and bought a glove. They had some that were very nice, leather and expensive. The smell of the gloves reminded me of childhood. I remember softening one glove with oil, preparing for the season. I would stand in the outfield with the glove in front of my face, smelling it, counting the passing train cars that would move slowly by the fields as I peeked over the top.

I was never very good at baseball, but I enjoyed playing. Like with most sports, I never developed the right type of competitive spirit. I just wanted to be the funniest guy on the team.

One season we made it to the final game in our league, the championship game. Altamonte Springs, Florida. We lost on the last pitch, an out-of-the-park home run. We were one more strike away from winning, an easy throw to first base would have done it, anything. They had a player on 2nd. They won by one. It was crushing. I can still hear that hit, see the ball flying high and away, landing on the far side of the outfield fence. It took so much with it. It bounced a few times and then settled into the grass. The other dugout was jumping and cheering. I stood at the fence of ours and watched as the player jogged past us to first base and then around, jumping as he went. Our players walked slowly in from the field while theirs gathered at home plate, cheering. I was not prepared for the feelings that followed.

The coach hated me, I think. He probably would have wanted them to "hustle" in from the outfield. I was a smart-ass, if you can believe that. He fashioned himself to be some sort of.... winner, I guess. I would mock him and do "the hustle" whenever he commanded. He would make me run laps for much of practice, but I became a pretty good runner. By the age of about 14 I was quite the long-distance candidate. Then, at 17, I had a serious accident in which I sawed half of my right foot off with a motorized blade.

Have I told that story here? I'm never sure.

The emergency room doctor told me that they might have to amputate the foot just below the ankle. They gave me morphine and a few other extreme drugs they dispense in those situations. I enjoyed them all. The nurse patted my arm and told me everything was going to be alright. I assured them that would be fine, not to worry about it, that I probably hadn't even washed that foot in weeks.

I was in shock, of course.

Then, a specialized doctor, a French laser microsurgeon, stepped in just before they brought out the saw. He told me that he might be able to save the foot but that I would likely never walk normally again, never run, never be an athlete. He too, was wrong, I think. Very few have commented on my inability to walk normally when sober, though likewise nobody has ever asked about my waning athletic career. Perhaps they are afraid to, or more likely, the possibility has simply never occurred to them. 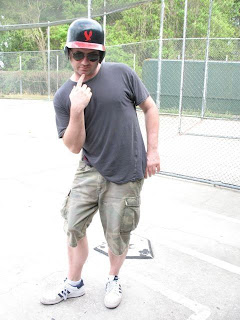