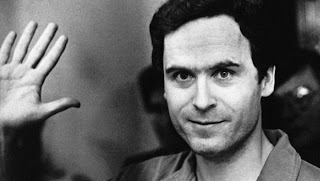 My piss has turned to uric poison. It is supposed to leave the body sterile though mineral rich, which explains why it becomes "less than sterile" so quickly. That, along with its warmth and moisture.

Whatever sickness it is that has gripped my body is finally making its way through, and out. The cleansing organs have been working all night, as I was nearly sleeping. I've been helping them along by not drinking at all for the last few days, but now they've shown their hand. It was all a dark yellow that smelled stinky foul, and it burned terribly, of course.

Any loss of vitality is just a practice run, and it does not burn when I pee, any more.


I've encouraged Cato not to be too vulgar on his new site, and now look at me... I'm despicable.

A female friend, long ago, once told me that I have a "Bundy-esque charm." That would be Ted, for those of you perhaps too young to recognize the reference. He was an American Monster, or some named-for-television thing like that. There were several documentaries made. He was a quite storied serial killer in his time.

He escaped from prison a couple times and then acted as his own defense attorney, keeping himself from both extradition and execution for over 10 years, several appeals, etc. This all happened at the very end of his run as a serial killer. There weren't enough female victims in prison, sort of. Some experts surmise that he came to Florida only because they have a death penalty, that he needed to increase the risk to increase the pleasure. He had perhaps become bored with just the standard rape, killing, mutilation and necrophilia.

At FSU, five victims in one night, four within 15 minutes of one another, within 30 feet of each other.


He asked a woman who had previously testified on his behalf to marry him in court, she accepted. By a strange Florida law (are there any other kind), because he had done so in a courtroom and in front of a judge, they were considered immediately married. There was nothing the judge could do to stop it. It was the law.

Mrs. Bundy and he had a child together, nobody is quite sure how. Oddly, he never killed her.

The anticipation on her part must have really been something. Believing somebody to be innocent is partial, no matter the level of faith.

It took three death sentences to finally execute him. It happened the day after Salvador Dali died naturally, or rather, in a very non-surrealistic way.

I think my friend only meant that I could be devious and convincing. I never asked.