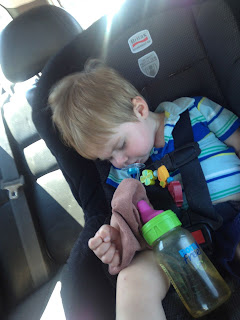 (dreaming of the tides)

Yesterday: I took Rhys to the beach. We went with a childhood friend of mine and her sister's family. I'm not sure if I've ever told the story here about her. She and I have been buddies since just before adolescence. I must have told that story, right? Somebody remind me. I'm getting old and can not distinguish between memories and shared fictions.

Quickly: Lisa, my friend from childhood, along with her husband Matt and soon-to-be adopted child, live here in Sonoma. We were very close friends from the ages of around 11 to about 16, then her family moved to Nashville. We stayed in touch intermittently but then lost touch, as I had done with so many of my friends, for about 15 years. She found me online, writing a column for a music website out of Amsterdam. She saw that I was coming to visit San Francisco soon and she invited me out to Sonoma to visit and meet her husband. I accepted and started making a visit to Sonoma a regular part of my trip to SF. It played a very significant role in Rachel and I having our wedding ceremony here, as well as eventually moving here. I must have relayed that already. It sounds familiar.

The Beach: We went. As I've said before, taking a child to the beach is not like other visits there. It is nearly perpetual work. I don't know how women do it, but they seem to sometimes love it. If the child is not in your arms - and even when they are - you must be on the lookout much of the time for them eating sand, crapping their pants, drowning, or eating a jellyfish - all sorts of terrors. I didn't take a single picture while there. A wet diaper filled with poop is a very different monster. But it is a quite special feeling to see the boy fascinated with the waves, the water, the open sky, the ocean itself, the Pacific. I'm not sure how much he can grasp the enormity of it, what version of the truth a child's mind brings. I imagine it to be a snow globe version of the place for him, though perhaps I am only imposing my sense of the rounded edges; likely. I know that he cannot yet imagine Asia across, that's all. Infinity for him might mean as little as losing sight of me for a moment when he turns to look. Who are we to ever say; assumptions all. Last time we had much fun together running into the surf and then retreating from it. Yesterday, he was fascinated with the waves. He would stand on the shore where the waves were making their last thin, spreading break. He would fall forward into the water as it would draw away, and then again be knocked backwards by the sensation of it advancing past him. It was hysterical, though I had to put a limit on how much hysteria I thought he could manage, the parental assumption becomes fact. There were a few moments when the tears came, but he recovered quickly as the next wave approached. I would just stand him up again and the ocean would take over. It must have tricked his mind into thinking he was falling forward or backward and he would just go with it. Or, considering that he was dropping towards the flow of the water perhaps some desire to compensate and correct was his undoing, the liquid earth moving unexpectedly under his feet. His newly learned ability to stand coming up against an eternal foe. It was fantastic. When I would pick him up to right him he would be covered in mud, and giggling, excited towards the sea. I mean covered, beach mud packed under his shirt, down his ass crack, partially trapped by a sagging wet diaper, saltwater mud in his hair and on his face. Yuck. Kids are quite a sensation, exhaustingly messy. Nothing is miniature about the chaos they make of themselves. They live for it. Once I got to the open showers I conceded that there were some things that should not be managed publicly. Feces, etc. We returned home prematurely. I took him to the car, changed his diaper and placed him in his car seat, a lone deep breath as the final click confirmed it. He was asleep before we left the parking lot. I felt as if I had been flattened by sunlight. The drive up through the hills and away was peaceful. The boy and I had bonded, which made it all sensible and warm and worth it. To wit, there was a moment in the day as we were waiting for our food from a little local shop in which he and I started playing with a straw. He was trying to jab it into my mouth and nostrils and eyeballs as I held him, so I started biting at it, a thing that he seemed to find hilarious. All that I needed to do from there was add a "rumph!" sound to each bite and he became devastated by my unending comic genius. The boy could not control himself, he was consumed by giggles. The rest of the day and into last night as he was going asleep he kept instigating more of it from me, rumphing me from a distance, peeking around corners to launch a surprise rumph!, expecting the same in return. From across the house we would trade air bites at imaginary straws, chuckling and chortling as we went.