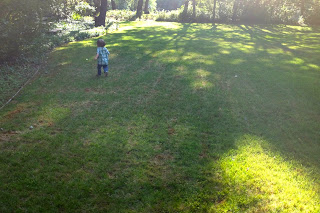 Yesterday, we all went into the backyard and let the boy play freely (see above).

A few minutes later we discovered a tick attached to the back of his head. We bolted into action. Upstairs to the medicine cabinet. I couldn't find any rubbing alcohol. Hydrogen peroxide would have to do. Rachel held the crying boy over the sink face-down while I tried to clear the hair away, all the while generously pouring peroxide on his little head. I couldn't get a good enough grip on the little parasite. My rounded adult fingers, useless against it. The hideous thing was soaking wet.

This incident would likely qualify as the only time in my life that I didn't first think of vodka as a solution for a problem. But I must be honest here in these pages, I didn't. But when it did occur to me it was just like all of the other times; a lightning bolt of inspiration.

I ran down the stairs considering different mixers. I grabbed the gallon and a half jug of Stolichnaya that we keep on hand for just these occasions, then ran back up to where the most recent recipient of either Lyme disease or Rocky Mountain Spotted Fever awaited me. Again, Rachel held him crying upside down over the sink and I administered delicious, nearly flammable health, straight shots of it right to the back of the boy's cranium. I looked carefully again. I wasn't entirely sure if it was my imagination but the aggressive little passenger seemed to have moved closer to the lad's spine.

They both liked the vodka even less than the hydrogen peroxide. But eventually, even with my nails clipped, I pried the malformed arachnid free from the backside of his skull where he was already feasting happily on my son's fresh new blood supply.

Then, like a parent that lives exclusively on television, after I pulled the tick off of the back of the boy's tender head, saving his spinal column by imaginary moments, I sent the struggling and kicking little fucker as far from science, modern medicine and access to information as possible. I gave him his chances in the world of modern plumbing. Into the sink he went, along with a half-gallon or so of fresh water.

He went the way of the vodka.

Nothing about what I had done seemed anything less than mildly heroic until I went online and started trying to diagnose the disease that would soon destroy our lives. It was then that I began to question the shape, color, and size of my heroics.

In my memory the thing seemed to be about the size of Mothra, maybe larger, swollen with having feasted directly on my son's plasma for who knows how long, preparing to decimate Tokyo.

I scoured the internet, starting with the CDC, then moving on to sites dedicated to the horrors of infection, disease-porn filled with images of victims and their lurid, unlucky tales. Open wounds that evoked dark, unpleasant memories. They all basically said the same thing: there is nothing you can do now, doom awaits you, accept your fate quietly. It was all just a host of symptoms listed that the boy would need to be able to speak to convey, except perhaps fever and nausea.

Rachel and I, of course, got into a brief argument. Because, in truth, what would parenting be without a little disjointed teamwork?

This morning it was impossible to tell that anything had touched him. Victory!

One less tick in the now suspiciously overgrown backyard....