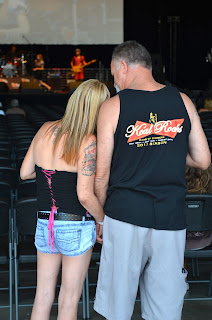 (I wish they all could be California girls)

I've never had a manicure or a pedicure. Perhaps it is time. Perhaps I am ready.

Once, I was encouraged to get an exfoliation. It involved steam and extraction and a mask of some sort of help clean the pores. It was only days after my mother had died. I was told that it would be relaxing, that it would help me relax.

What did Dorothy Parker say? "LA is 72 suburbs in search of a city." Something like that. Quite clever, that Miss Parker and her vicious circle. Also, quite the survivor of suicide attempts, she.

I have a friend who used to sometimes stay at the Algonquin hotel when he would come to visit NYC. It is an interesting place, with much history. We used to sit in the lobby and drink, he would tell me about them, the circle, about their time. They were an influential group of New York writers, critics, and artists who used to regularly meet there at the hotel for lunch, to see who could out-snark one another, long before the term took on its present meaning.

New York is a good place for it. Robert Benchley was one member of the circle that made the leap from New York to Hollywood. He was in one of the Hitchcock films. I forget which one.

Foreign Correspondent. I had to look it up. He also wrote part of it. I hadn't known.

We are told to always question assumptions, to doubt collective wisdom and values. But when you try to do so, Oh my... You will see.... The "other" values were the ones you were really meant to question.

I have been in a feisty mood lately, testing boundaries for no real reason. Or, for reasons that are not worth the potential price: angering or alienating people. I don't know why I do it.

Because I can, I guess.

"The road to hell is paved with unbought stuffed animals." -Hemingway