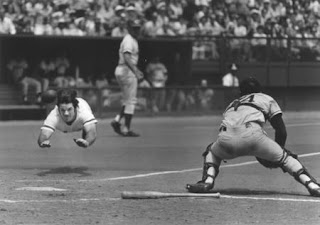 Four day weekends are the way it should be. Your traditional two-day weekend should be buffered by a day off on each side, always. The three day work week is where it's at. Imagine how productive we would all be in those mid-week days. Nobody even cares about Tuesday, Wednesday and Thursday. It would be a win-win for everybody. We could call it the Super-Size Weekend. You can get them at 7-11, like lottery tickets.

Holy crap, speaking of lose-lose.... I struck out in softball yesterday. I didn't even know that such a thing was possible. I leaned into two pitches, dangerously swatting at air, then was caught watching the last, flat-footed in the shoulders. Shameful, truly disgraceful. I wish I would have pulled my back out on the first wild strike, hospitalized myself instead of what I actually did do. I should have shit my pants at the plate, just forced a couple big turds out into my drawers, fell to the ground and claimed I was having a stroke, anything.

The bases were loaded and it was the third out of the inning. The team needed me to get at least a base hit, a thing that I'm pretty good at, usually. I had gotten on twice in the game, once even from some Pete Rose type hustle to first, but this was just deplorable. Rachel hasn't had sex with me since, hasn't even kissed me. She offered some batting advice after the game. She got drunk last night and talked about old boyfriends, texting secretively, giggling. Rhys spent the remainder of the day crying. This morning he woke up and rolled over when he looked at me, burying his head into his "wuzzy" and moaning, not wanting to be picked up.

Contemptible. I think the team captain is going to trade me.

C'est la vie, as they used to say.

"It's a round ball and a round bat, and you got to hit it square." - Pete Rose