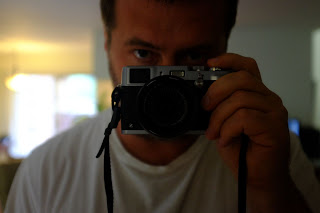 It has been hot here, very hot, above 100 degrees. That's like gay-nightclub hot. Yesterday, the digital thermometer in Rachel's car read 108, though that can't possibly be accurate. It was nearly unbearable. I felt like a three-legged dog, trapped in the family sedan with the windows rolled up, abandoned on the fringes of the Wal-Mart parking lot. My mind was howling to escape.

We couldn't take it any more, my howling. We went to a friend's house and swam in the pool. There really is nothing else quite like submersion to fight off heat and the unending misery of summer fleas, not even air conditioning, not even cold beer in air conditioning. Nothing.

Ice cubes are useless compared to a pool.

Rhys loved it. He has sensibly determined that if he just walks into the water then we will scramble to get him. He either seems to have no fear or he has enormous trust in us. He requires constant monitoring, though he is thankfully predisposed to walking into the pool towards the place where one of us happens to be. That kid is rarely more than two steps distant from calamity.

The day before yesterday it was equally hot, if not greater. I can't remember much beyond that, it has bleached my brain. We went to a local charity event. It was impossible to listen to people ask for financial help in that wretchedness. I couldn't sit still. I had to walk over the the entrance where I could get closer to an air conditioning vent. Fat people do not hold up well in these temperatures. I'm certain that there were some there that were angry with me, that I was blocking the flow of cool air, somehow fouling it with my advanced and sweaty presence. I was desperately looking around for a sturdy chair to stand on, to get my head closer to the source.

At one point I'm pretty sure I saw Rhys humping Rachel's leg. I didn't even care. She looked good. I couldn't think about the implications of such a thing in that stifling heat and humidity, though. I was relieved that somebody had the energy to do it. It was a sign that we might survive. The last few days have been pages ripped straight out of Revelations. I would not have been a bit surprised to hear frogs falling from the sky last night, cooking on the roof. These are the plague-times.

One partially good thing, at least: the heat has doubled the size of my cock and balls. They just hang there, stretched, trying to get as far away from my body as possible. I've been looking into nudist camps in the area, wanting to take advantage of it while it lasts. The cock - much like the clitoris, lips, and inner ear - cannot sweat. It does not have the required glands for such a thing. The balls are quite famous for it, but the cock is treated mercilessly in this weather, in an evolutionary way. Nobody ever references their sweaty cock but the balls are hardly ever accompanied by a different adjective. The temperature will only make it uselessly hang there - which may help the cooling process some, giving it more surface area - but that is minor compensation for the other misery.

It's pitiful to witness, there is a forlornness that saddens.

I've been going to the gym regularly, trying to recapture some youth. But as I slowly get back into a simulation of shape I just end up looking more stretched. My arms and shoulders and neck and face do not look the same any more. The skin refuses to react the way that it once did. I'm a melted version of myself. My whole body's starting to look like penis skin. It seems as if it has been grafted on well enough - though not quite as snugly as I might have preferred, with only the occasional seam being noticeable - but the surface must have been taken from a distant relative. It's not my skin, it's not possible. The years have embezzled my life away. My body looks like a duffle bag that was once used in a getaway run.

When did I become this aged thing. I appear in the mirror as a police sketch of my former myself, a fugitive from my own past. It will not surprise me at all if one day soon I awake to find the entire world still rendered in color but my reflection will just be a rudely stated black and white composite. I've gotten in the reluctant habit of stopping by the post-office, to keep an eye on the wall, in the event that a familiar ghostly sketch reappears there.

"Oh, the only decent thing I did when I worked as a postal clerk
Was to haul your picture down off the wall near the cage where I used to work."
-Dylan