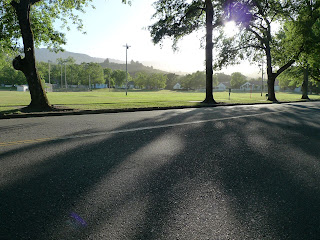 Sprint. It has been many years since I have done so. Then, there was yesterday. Fueled by beer and a gluttonous need to not appear old, my decades bolted. Each time at bat I got doubles. By the time I arrived on second it felt as if my heart would explode. It's meant to be exactly 120 feet from home plate, but to get 225 pounds there, as quickly as humanly possible, well.... it put an unusual and unexpected strain on my vitals. I suspect that I broke a few land speed records, but the numbers do not support that, apparently. In fact, nobody seemed even remotely impressed with my performance. There might have been some half-hearted clapping.

I'm not even sure when my knee went out but today it seems like it somehow got twisted. All of the ligaments and tendons feel as if they have been stretched counter-clockwise about 3 hours worth. I'm afraid to touch it. It has become the weakest link between my head and the ground. If I go down it will be towards the right.

We got our asses handed to us by a team that has played together for about 4-5 years. Eventually the umpire called the game, for excess of time. They were well into the double digits by that point, I had stopped counting, or caring. It had become batting practice for the other team, but it was fun. Have I already said that?  Yes, I guess that I have.

There were many errors made, luckily by almost everybody on our team, at least a few times. Shameful mistakes that led to perpetual scoring by the bad guys. Had I been witnessing the spectacle only as an observer I might have guessed that our team was on some very strong psychedelics  All of our actions were slightly after the fact, much more so than required to be effective. It was as if we were chasing the "trails" of the ball rather than the thing itself.

Our teams colors were tie-dye. We looked as if we were milling around the parking lot of a Phish concert in formation much more than being a softball team engaged in heated competition.

It took very little this morning for my own mind to convince me that going to the gym was a very bad idea. A horrible idea, in fact. The worst thing imaginable, even