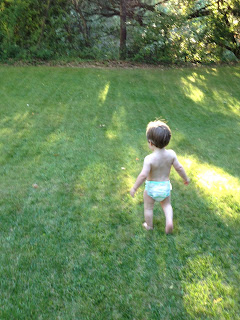 The second best thing about a 3-day weekend is the 4-day workweek. It is Friday already again. Every week should be like this. Workers of the free world should demand it! People would love each other more, I'm certain of it. The Beatles had it wrong. They should have written songs about not working too much; being rich isn't the problem, being poor is. Impoverished of time and the freedom to enjoy it.

I've heard some say that it's all in your mind, though interestingly those people always choose to vacation elsewhere.

I watched Rhys last night. It is absorbing to witness first-hand the little characteristics that are forming. He gets to do things when I'm watching him that he might not when mom is around, like walking around the backyard in just a diaper. Ssshhhh, don't tell...

It's impossible not to wonder what Rhys will be like as he gets older. Being a parent it's also impossible not to worry a little bit about the common things: will he be happy, will he find something that he loves to do, will he and I be very close when he grows up, etc., etc.

People still give us much unwarranted and unwanted advice so I'll avoid dispensing any of mine here, at least the stuff about having children. It hasn't been tested long enough for me to have enough faith in it, but I think I have part of this fatherhood thing figured out: Hydrate, Get regular sleep (no matter how strong the temptation not to), learn to share, breathe, all of the basics, etc. Just little reminders.

Children must be molded, to some degree. I see that now. The idea might not be to just let them grow up however they choose. Some part of me believes in an idealized world where that would work. But all children start out as kleptomaniac animal abusers, some encouragement and discouragement is required here and there.

"Two of us riding nowhere, spending someone's hard earned pay, Two of us Sunday driving, not arriving, on our way back home..." -McCartney

Many days I'll sit down to write here, then go to the gym when it opens at 6am, when I return I don't feel the same, or I have to go straight into working, where I lose whatever train of thought I might have had. I'll think of other things to write about while doing cardio, by the time I'm done they are nowhere.

Life is ephemeral, so much of it is already gone.

How does one explain that?

It can be felt but can it be taught?