"It rumbled through the valley, it rattled in the dell;" 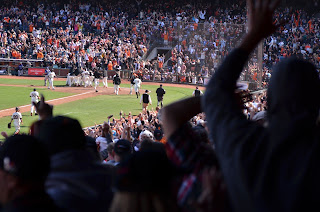 (just after the play at the plate)

Oh yeah, I forgot to mention it here, we went to a baseball game last Saturday, The Giants vs. The Rockies. There's nothing else quite like it. I have friends that eschew, and even detest, the experience. Not me, I love it truly. Even Cato felt it necessary to denounce all sports in a general way long before we entered the stadium where he began seducing children. He still has much to learn... There is very little in sports that is as fine and elegant as a baseball game when seen at the park. This happened to have been an ideal game to choose to go see, also.

There is no such thing as a great game without bad calls, it is part of what makes all sports exciting, the feeling of your team being cheated; the collective indignation against the inability, unfairness, or even the wickedness, of the judge. Soccer could not exist without it. It is such an important aspect of world futbol that they refuse to even consider video playback for official oversight and review. Corruption and error mean that much to them. One must watch the Italians play, truly. They make it impossible for you to ever forget that their culture also invented the opera; it is drama for children, based loosely on a reduced narrative. It is a story that even a child could understand, if they weren't so bored out of their minds with it to do so. Yet somehow, in the rarefied atmosphere of the adult mind, it supposedly transforms into high art.

For some, I guess.

There were a couple of very important bad calls, both against SF, one at 3rd base and one at home. From the distance at which we viewed them they seemed to be impossibly bad calls, but then there is just that: the distance from which we viewed them. The Giants had the bases loaded twice during the game only to concede the field with three outs and no additional runs. The coach was tossed out of the game in the eighth inning while excitedly contesting one of those bad calls. There were no replays on the massive screen in center field. The fans would have rioted, they were ready. It took SF scoring an in-the-park home run at the bottom of the tenth to finally win the game, a very rare event to witness live.

It's worth watching the clip, Angel Pagan rounding third and being waived and ushered in to home by the third base coach, the long relayed throw and the play at the plate....

It's been nine years since anybody in the MLB has done it, 82 since a Giant has done it, when the team was still based in NYC (Don't let this upset you, the Yankees were founded in Baltimore, and were originally known as The Orioles, etc.).

I credit Rhys' presence there, of course. He is charming and full of luck. Pagan, the hero-player who hit the walk-off homer, has yet to publicly acknowledge this talismanic influence. I was prepared to announce little Rhys' candidacy for mascot-hood. As we were walking back to the car there were excited fathers explaining to their kids and their kids' friends how rare what they had seen was, how lucky they all were.

I agree. It was really something.

I tried to link an essay here, but I couldn't find it given away freely on the internet, where so much else that is of far less worth always is. For anybody interested it is called "On Baseball" by Jacques Barzun and can be found in his "Reader" anthology, or in its original publication, "God's Country and Mine" (don't let the title dissuade you, it's all worth reading).

Well, I won't bore you with facts, but the Giants are a great team to watch. More exciting than the Yankees and their fans are more agreeable, for the most part. I used to love to go to Yankee Stadium, but there is the problem that the place is always filled with Yankees fans, etc. There is a smugness in, and assumption of, victory there that is off-putting; an expectation of crushing greatness that causes in the witness a perverse joy in their defeat.

Though, in truth, they are New York's team, mostly I would just cheer along with the others, happy to be at the game. 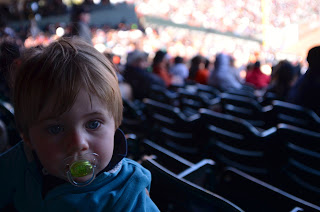