"Get some pussy now!" 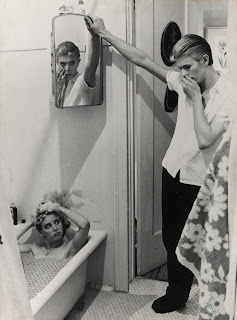 Each morning some new infirmity awaits me upon awakening; sinuses, sore throat, coughing up phlegm, eye crusties, soreness and general misery... When will it cease, oh dear and precious Lord? Doesn't your victory on the cross have any practical benefits?

The coffee functions as antidote to the cherry NyQuil.

Ah yes, I almost forgot. In all of my advocacy for NyQuil I should have mentioned to just get the "Cough" version of it, not the "Cold and Flu" (unless you need it). The Cold and Flu version has acetaminophen in it, which is rather taxing on your liver. Only use that if you really need it. Never, ever combine that with other medicines that contain acetaminophen, it is very dangerous, says Dr. Cusick.

I prefer the mild sedative properties that allow me to sleep peacefully, of which the "Cough" version more than suffices. It seems to have a lesser half-life.

That's my concerned "dad advice" for you.

Yesterday a package arrived and I tore at the box, thinking that my camera arrived early. But it turned out to be a book - a very generous gift from a friend - the book from The Victoria and Albert Museum's David Bowie exhibit. Pretty cool. I only had a few minutes to look through it last night but since Rachel's out of town I'm probably going to get dressed up in drag tonight and joyfully lament over each delicious page. I'll put on my favorite albums from the "gay years" by Bowie.

I'm not sure if I've mentioned this story here before: When I was a kid I used to hear Bowie on the radio and I thought he was more interesting than so much southern rock that would get played (This was in Florida in the late 70's/early 80's). So, I went to the mall to search Chamelot and Musicland (This was before Peaches opened) to find some Bowie. At Musicland there didn't seem to be any. That seemed strange. I knew his name and had previously memorized the alphabet, but there was nothing under D or B. I asked at the counter and the guy said, "Oh sure, we've got it. It's in the 'Gay Rock' section."

This is no joke. There it was. I had never even noticed that they had a section called "Gay Rock" before. Being only about 11 or 12 years old I passed on buying Bowie, at least for another few years, when it wasn't such a taboo word for me any more. The stigma of "gayness" was a favorite among adolescent taunts, etc.

I don't like Tilda Swinton very much. I don't hate her, I just don't gravitate towards her. Several of my friends have seemed surprised when I've said this in the past. One of them even going so far as to suggest, "But she looks just like a mid-70's Bowie!"

Let me try to be more clear about my appreciation of David Bowie: It's his music.  I appreciate that he did what he did with a flare for the visual aspects of his show, the fashion, and design; it added a sense of the theatrical... and certainly that added to his rock mystique. But if his music sucked then I wouldn't have really noticed or cared. Whose cock he does or does not suck is entirely inconsequential to me, as is who may or may not be sucking his, etc.

That's all. I wouldn't like Tilda Swinton because she looks like David Bowie, or like her any more or any less than if I found out she was gay. I never wanted to fuck Bowie. I only liked his albums. People assume that if you like an androgynous or bi-sexual performer then you must have some secret desire to engage personally in that charged ambiguity. But not everything about a person's sexual preferences can be presumed or deduced from their taste in music.

I have a friend who is an ardent fan of The Pet Shop Boys, and by most accounts he's a heterosexual.

It's a total mystery.

The friend who bought the book pointed out something to me about one of my favorite Bowie songs that last time he was here visiting. At the very end of "Lady Stardust" I had always heard Bowie's voice whispering something but I never took the time to discern what he was actually saying.

He sneaks in the line "Get some pussy now!"

So, there's that, I guess. Does that convince any of my many detractors? Perhaps not.

But I can't believe I never heard it before, from an album that I have listened to thousands of times, Ziggy Stardust. It's always interesting to hear with fresh ears a thing you have ceased really listening to. Long ago I had memorized a voice happening in that spot of the song, but entirely detached from meaning.

Speaking of meaning, I have been meaning to mention that Bowie's new album is his best in many years, decades even. I've only listened to it a few times but I think it's equal at least to his mid-eighties stuff, maybe even better. It doesn't quite compare to anything before "Scary Monsters (and Super Creeps)" but it's still very good. He relies on several of his favorite leitmotifs: titillation with stardom, alienation, mocking love (he's never written a convincing love song, that I know of), fear of small-towns, and fear of Americans, dressing in drag, etc.

But even more than being a good new album it seems to evoke the greatness of past albums without devolving into self-imitation. If you had never heard of David Bowie before you might not think very much of it. But, as with many artists, there is an interplay with his personal musical history and overarching thematic development therein that really seems to work.

Bowie invented The Talking Heads, Bauhaus and even Radiohead without trying. I'd be happy to support that assertion, one at which many of my friends will want to argue, but not this morning. It is too late and the day has already begun without me.

The "Gay Rock" is already off and running....