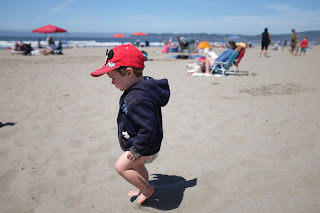 We accomplished the beach with some concerted effort. There was very little that was relaxing about it.  I took about six pictures. My contribution was staying out of the way and not talking too much. Taking kids to the beach is not like going to the beach with peers or with a lover, at all. It is all work and consideration and concern and effort; impossible to simply lie in the sun and relax, pleased in its warmth, with the sound of the waves providing their earthly aura.

A 16 month old boy, pictured above, was tossing sand everywhere. What seemed to make him happiest was to fling it wherever I was lying. The beach is made mostly of sand, as some of you may have noticed. Rhys, for unknown reasons, was trying to ingest handfuls of it every so often. When sand and saliva mix it unsurprisingly makes mud. Somehow this simple fact had escaped me, until yesterday.

When all is said and done the kids were cheerful about it. I suppose that is why people do it.

Well, I can't speak for others. Perhaps Rachel and Lisa (we also went with Lisa and the child they are fostering with hopes to adopt) were very content with having gone, and perhaps enjoyed the day immensely. It was, after all, their day. It just seemed to be constant effort without much relief for them.

I was prepared to drive a stake into the ground and put them both on elastic leashes, possibly leave them there. If a pirate ship had anchored offshore I might have taught them how to swim.

A friend wrote this morning about a study that shows that having children does not make people as happy as they believe it will. If he is referencing the study that I believe he is then the scientists (economists) measured the various activities throughout the day and assessed which ones make people the happiest. Sex seems to make people merry, caring for children does not. Their assertion is that we tell ourselves that having children makes us happy and it is a mainly unquestioned assumption, bolstered by societal pressure. So, they questioned the assumption.

I have had times in which I was prepared to eagerly agree with their findings.

In fairness though, towards the end of the day, I took both kids to the water and was playing with them, letting them run into the surf a little bit and then back again, excited at the oncoming water, shrieking with joy, probably pooping their pants. Then, I would pick them up and run again into the oncoming surf; 50 pounds of cackling children. One on each side, and me. Them, kicking and shrieking as we went. It was fun, and I was very delighted doing it. The giggles of a child can go quite a long way in making things seem worthwhile. That is what I remember mostly from yesterday, truth be told.

I'm not quite sure how they measure that as an activity when assessing happiness, a child's unrestrained laughter. They say that it is the best medicine, rarely ever mentioning that it can be administered by unlicensed youngsters in wildly unpredictable doses, nor do many ever cite its rather impressive shelf life. 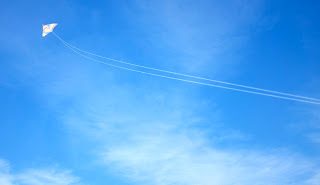