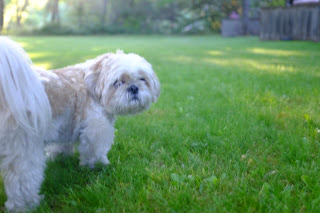 (The pup is feeling punky)

I spend half the night awake, lying in darkness, wishing that sleep would pull me into its unknowing fog. It is a terrible way to make it through, wishing. There are others that are far worse off though, so... of what do I have to complain? But, complain we must. It is one thing that informs our inner-selves that we are still alive.

We've run out of sugar, so now I drink coffee with non-dairy creamer. Most of the improvements in my diet occur as a combination of accident and sloth. Eventually we'll run out of creamer, then coffee. I wonder if I'll recognize what water tastes like after all these lost years.

A friend sent an excerpt from the New York Times giving advice on how to write: Show, don't tell. Avoid cliches, and to try not to repeat yourself.

Well, regular readers here already know my response: If I had a nickel for every time I've ever said that.

I dreamed that I saved my father's life last night. I was proud, quite rich in dream currency, as you can imagine. He had fallen and was hanging on to a rope, beneath him were deadly rocks and a substantial fall, an irrecoverable prospect. I leaped and grabbed on to the rope with him, was able to swing both of us to safety.

It was then that I realized I was in a dream.

My father is quite old, unwelcome news could arrive any time. I don't remember dreaming of him before. Were I superstitious then I would say so, but it is not that. It is just fear alone, not wanting him to die.

Rhys just woke a little. I made it to his room first, he was standing in his crib with the fading dust of sleep still in his eyes. I picked him up and he fell half back asleep, his head resting on my shoulder as I held him. It is one of my favorite moments of the day, to greet him at his crib. He is all loving sleepiness and hugs. It hasn't yet occurred to him that he can demand his Mommy!... In these moments he is perfectly content with me and I with him. It is only a small thing, but so much of life is.

Well, I wrote what there is above before going to the gym, then came home and read a friend's blog. I feel like I should perhaps qualify: it was not written as a rebuttal of his, nor was yesterday's (only as commentary).

There are simple things to enjoy in life with children. Admittedly, the simplicity sometimes comes at a higher price, and with perhaps more pre-effort applied to it, but it is there to be enjoyed when it can, the same as the other life. If not the same, then not entirely different. Life resembles life.

The house is chaotic and not entirely of my own making. I'll admit, it sometimes drives me crazy. I have new fears, one partially chronicled above. In sleeplessness the night is filled with the chattering of fresh ghosts, though so often in the mornings they have fled.