The shape of self 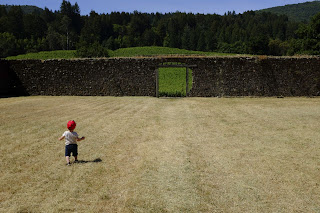 Weekends are wonderful. Nothing pollutes the mind upon awakening the way in which a weekday does. There are only the clear, untroubled, half-formed ideas of the day, in leisure.

Well, I took my camera with me everywhere yesterday, testing its various functions as well as I knew how. There was only one thing that seemed amiss with it. The makers, Fuji, had put one feature in the Setup menu when it really belonged in the Shooting menu. I had flipped the setting at some point and forgotten about it, not even really knowing what it did. It caused the camera to "jump" in to the focus area when focusing manually, a thing that it had not done previously. As the majority of the wine spill happened on the lens area where the aperture and focus rings are, this had me a little worried. I was fairly certain that this was a feature and not a malfunction, but it still kept me busy for a half an hour or more.

In the end it would seem that the camera sustained no real damage. I ran alcohol wipes underneath the dials and some wine residue did come out from under the Exposure/ISO knob, but it was fairly faint and the knob still works as expected. The perpetrator of the spill is likely coming out to Sonoma today with his wife, both were managers of mine at Apple. I have told him that I will be dispensing his wine in one of Rhys' Sippy-Cups, if at all.

He has been warned.... Maybe I should write him up, make him sign a disciplinary document of some sort. We might go to Jack London's house today, the old vineyards of which are pictured above and below.


Rhys is a joy to be around. All day yesterday I had so much fun with he and Rachel. Sure, he's a toddler, so he only has a few different modes of communication, one of which is to whine or halfheartedly cry, seemingly in perpetuity, but even that I find laughable or at least occasionally charming. We went to buy him some clothes and I ran around the store with him, watching him do his little galloping two-step in an endless attempt at escape. Who knows where he thinks he's going. But it is adorable.

It's the little things... impossible to convey their full effect. To wit, whenever we see a yellow car now he says, "Dada!" The car I drive is a yellow VW Bug. People find this fact endlessly amusing when they come to visit. Sean, the deeply cynical New Yorker, drives around California in a stinkin' hippy-mobile. Hilarious to them, for some reason.  I like it. It's fun.

Just wait until we buy a VW camper, a Westphalia.

But Rhys is beginning to interact with us in a way that more closely resembles the interactions we are accustomed to, through language. He emulates forming sentences. It sounds like gibberish to us, mostly. But every now and then we'll be able to hear little ideas forming there. Rachel is admittedly better at this than I am. He's beginning to piece the world together.

He is starting to recognize the difference and separation between us also. I had read, or had been told, that it occurs about at a year and a half in age. Sure enough, when I'm walking him around the house now and we stop in front of a mirror, he will excitedly point at my reflection and say "Dada!" I will point at him and say" Rhys" and he will look into his own eyes and then back at mine, happy. It is there, a glow of recognition. The tender spark of identity around which personality forms. 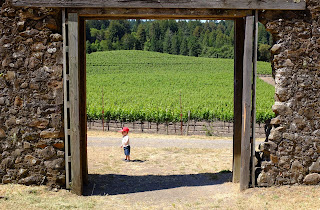