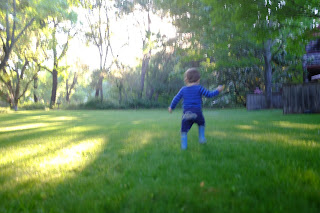 Terrible dreams last night, the worst yet, much too close to actual panic. Rhys could not be found. Impossible to tell in that imaginary state if it was abduction or he was lost. The dark fears stretched into infinity, yet held me paralyzed in sleep. The effect, whether the boy was lost or taken, was almost the same. He was gone. The imaginary terror and guilt fluctuated back and forth behind my eyes. My mind raced into fantasy panic. It was my fault, somehow, I knew that. I had let myself drift away in the dream, now he was gone. I was frantic, searching and questioning the smallest and most dreadful places within. There was nothing there but the shape of empty darkness. I might have even prayed in desperation, there being no reason not to within a dream.

I know the source, an argument last night, unpleasant things were said about an uncertain future.

I've had to watch him alone this morning. Rachel had an early meeting. So far he has had a piece of ice for breakfast, and he had to show me where those were found, etc. Barkley the pup, Rhys, and myself are all on similar diets today. Barkley's half finished piece of ice is resting on the carpet behind me, waiting to find the arch of my un-socked foot.

I just dropped him off at the day-care. He hugged and held me tightly, not wanting to let me go, calling me "daddy, daddy, daddy..." When he finally hit the ground and got distracted I took the opportunity to depart. His cries and tears came bursting through the door after me, chasing me in a way that dreams can not.