An object in motion 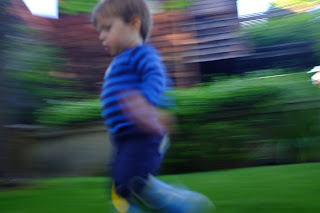 With this new camera I am the coolest guy in Sonoma. I'm just not sure how to adequately convey that to everybody yet. I would wait for them to figure it out, but who knows how long that might take. It's a toss up. I suppose I could just be seen around town more. That usually helps.

I am still taking pictures as if I just got my first camera, but I like them, so... I have gotten used to shooting in an almost "sports" style with my other camera such that I had forgotten that many cameras are not really designed that way. With this one, so far, I have either gotten one shot that is not blurred or several that are, but hopefully one that is likable among them.

I would have likely never gotten that image with my other camera. It would have been sharp and in focus, about 10 of them covering 2 seconds in time, all clarity and frozen motion. It's been nice to be reminded that there are other ways of shooting. I've been attuned to trying to capture the boy in motion but somehow forgot the motion portion of it. Neither style being quite what the mind or the eye see, but both instead becoming that. The mind and the eye recognize the truth as well as the distance from it. It is seen in the shards of implied continuity.

Well, those are the two tools I currently have at my disposal, anyway. I am a very limited photographer. I simply shoot a lot and hope for the best.

The new camera has made me a little bit more "zen" in my approach. I have had to show more patience. I have been willing to lie in the grass and wait, recognizing truths, distances, etc.