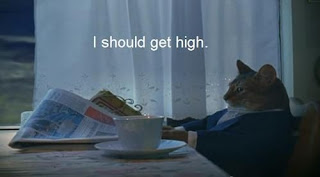 A friend pointed out that Bettie Page has been dead for a few years. I don't see where that matters much, the post yesterday was not really about her. In writing it is known as subterfuge, a trickery designed to serve one's greater goal. Also, another correction, she became a Christian before she lost her mind, not after. I fail to see much of a distinction there, and even my friend admitted this as he was making the point.

There is little difference between believing there are angels and demons floating around you, engaged in an ongoing battle for your soul, and schizophrenia. In both there is a breakdown in the relation between thought, emotion and behavior; both are characterized by fantasy and delusion.

To enjoy this site you must believe everything that is written here, accept it into your heart as fact, just as if it was Jesus' forgiving blood. If you begin to question any part of what is written here then that's just the devil trying to find his way back into your life. It will eventually unravel you and you will one day have to blubber your way back into His arms, preferably in front of likeminded others.

Or, all by yourself in desperation, where you can later give a heart-stirring testimonial about it.

Speaking of, some of you might remember that I lost a friend a little while back, a Texan in Christ and the Mighty 2nd. He didn't pass away, he just threatened me with a lawsuit for quoting him. He wanted to reserve the right to protect his folly. I forgot to mention, among the many things that he was dead wrong about, one of them that emerged in full after the dissolution of our friendship was Lance Armstrong.

He once told me that I had no idea what I was talking about when I said that it seemed pretty obvious that Armstrong used steroids and other drug enhancements. My erstwhile friend shares the same given name, and as I mentioned, is also a Texan. He would rail and rail about what a great athlete Armstrong is and how I simply have no idea what I'm talking about: I wouldn't understand the winning spirit that he possesses, being of good stock and athletic breed. Training in Texas isn't like training other places. A Texan is incapable of such untruth. I would never understand such a thing.

I hope that conversation comes back to haunt him, particularly when he's praying. It's good to have some doubts, except when it comes to the factual nature of this site, of course.

You see, any thought you might have that does not glorify god is from the devil. There is an eternal battle going on, with god and his army of angels on one side trying to keep you pure for your future (or next) husband or wife, and the devil, who is obsessed with making you masturbate. Nobody is quite certain why the devil enjoys forcing your hand so much, it is part of his evil nature. Questioning this is just another path he has back towards your genitals, up through your abdomen and into your head, though he's just as likely to try the opposite route. His vileness is like lightning, or water, it always seeks the path of least resistance. That's why Christians must always be so vigilant against pleasure.

I am, quite apparently, a lost cause. I'm like the devil's water park, a virtual Wet N' Wild of demonic transgressions; Beelzebub on Spring Break. The brute of darkness has gripped me since early adolescence. I remember the moment quite well, it was August 16th 1982, his evil struck me in the bathroom of my parent's house. He has had his cruel and wicked hand around me ever since, clutching at my genitals. Well, since he taught me the upstroke anyway. You can tell that it is the devil when your grip begins to tighten as you stroke upwards along the shaft and towards the head. Only the devil would function in this insidious manner, working in pernicious partnership with Farah Fawcett, two evil shape shifters, alike in both wickedness and manner.

It's only foolish pride that makes a teenage boy believe that he can outsmart the Farah Fawcett.