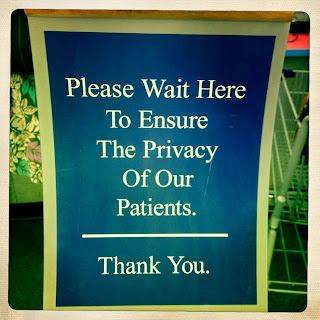 I miss Rachel and Rhys. They have been gone for a week now. It's too long to go without seeing the boy. Divorce must be horrible. I don't see how people do it. Staying together must reach a point where it just isn't worth it any more. Nothing can be done, nothing can be saved.
Every now and then something will happen that will make you realize that you are only fooling yourself, that you are barely skimming past something dangerous, as usual, anything can become your undoing, the smallest flinch, blinking at the wrong moment, anything.
I had a really bad day at work yesterday. I have no idea why. Everything just seemed to go wrong for me all at once. It was as if I could do nothing right. It has spilled over into the weekend for me. I woke up and checked my email, more bad news, as if yesterday's wasn't enough. Everything pointing towards me with red flashing arrows.
On the brighter side, I'm getting a biopsy. I went to the dermatologist. There was a spot that had a dark center and had been changing rather fast. The doc took it off right away, sent it to a lab. He tried to get it all without leaving too much of a scar. It was about three inches from my one functioning teste. He said that he didn't like the looks of it, at all, and now he has to make sure that it's not what he thinks it might be.
So, there's that to comfort me.
If the news comes back bad then I have some new things to look forward to: even more flesh removal, recurring blood tests, possibly chemotherapy, radiation, all of that.
If the news comes back good then we'll put all of that off until a later date.
I wonder how difficult it is to make the decision to die, rather than to "fight bravely." My mother did it. She started chemotherapy and then just said, nope, that she wasn't going to do that, she wasn't going to die that way. If she was going to die then she was going to do so without chemotherapy and radiation. I remember her telling me. Strange news to deliver, strange news to receive. There was lots of morphine instead. Most those who die opt for the morphine. I'm allergic to it, so there's that to one day look forward to. I won't even get to die with the opium palliative. I'll get some cheap imitation instead. Something they do in trailers nowadays. They wouldn't want me to die having an allergic reaction.
There are other opiates that can be administered, even stronger ones: diamorphine, palladone and dilaudid; fentanyl and oxymorphone among the synthetics, claimed to be even stronger than morphine sulfate, though not as pleasant. There is very little that is as pleasing as morphine when it comes to relieving pain, recreationally or otherwise. My body struggles with diamorphine. I would sniff little doses of it in "squishy" bottles, for occasional kicks, another lifetime ago.
There was that old commercial that showed the monkey that would press the little button to get more cocaine to the point where he denied himself food and sex until he eventually dies. The heroin button makes most people deny the cocaine button, though only about 1 in 10 become addicted.
The mind is the most erogenous organ, they say. Heroin speaks to this like nothing else, but I advise against it, of course. Addiction is problematic, if you still have life left to live.
I once had a dentist tell me that it is highly unlikely that I'm actually allergic to morphine, that it's probably something else. I think he was wanting to try it and see. He was a twisted old queen that spent far too much time looking at my lips. But, that's what I paid him for, so.....
You will hear some claim a love for demerol, and it works, certainly, but they love it mainly because of how fast acting it is. Fucking degenerates. There is no substitute for morphine sulfate. Well, there is one substitute, but they keep it mainly unavailable to dying patients until the very end. They wouldn't want you to form a heroin habit in your last few days of life. The only thing worse than an opiate-derivative addiction would be dying, right?
Imagine how many parents of a certain generation withstood the pain rather than have their kids see them accepting drugs. The immense suffering must seem worth it, rather than the alternative, sending the message that drugs are ever an option. Ever.
If the time comes, I will be sending a very different message to anybody willing to listen, and watch.
Fuck, to give you an idea: I was going to get an epidural today, just for fun, but they can't seem to figure out a way of paralyzing me only from the waist up.
.
Posted by Sean Q6 at 7:40 AM