used to the feeling 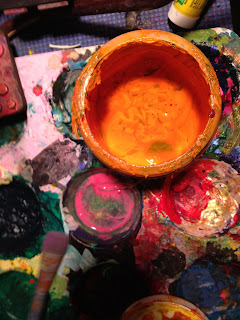 An early morning fog that burned off slowly. The drive back from the gym still chilly, me wet with sweat. The days drift by. I just want to read, alone, or at least left in peace.

It is what I am getting, sort of, but it worries me. There is a growing distance. Time.

People had warned me that "everything changes" after having a baby. I see that now.  It does. It is difficult to feel the same about things, to return to a comfortable set of sensibilities, to reappear in a familiar mask. There is so much change that some days you just want to crawl back into the husk that used to be your life and resume from there. But it is cracked and shed off, lost in the past. Even that does not seem so attractive when honestly considered, which is something you don't often do much of any more. The past is further gone now than ever before.

There is only the future. All things seem to happen exclusively there, all efforts for then, less for the present. All future fears and joys, hopes, seem to come to life when one lets the thoughts unfold. If they don't then you make them. Dreams can be forced, made. It is easy. It is nothing. Everything requires more energy than you had thought it would. Change is the only thing that will resolve the change that has already occurred. More is a returning requirement.

The paint has been mixed, there is no un-mixing it, there is only now the painting to consider. All things require a continued effort but without there ever being a sense of completion. Success is now a process rather than a moment.

For all the efforts that I've begun and never finished one might think that I would be quite used to the feeling. They would be wrong.