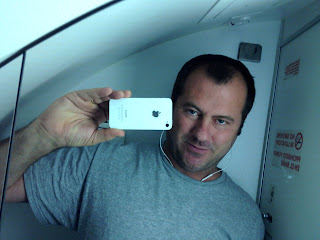 (barely able to fit into a plane restroom)

I can't figure out what's happening. I've been going to the gym regularly (5-6 days a week) for three weeks now, working out anywhere from 30 minutes to an hour, most days closer to an hour. Heavy cardio for about 20 minutes. When I leave I am drenched in sweat. Still, I've gained 5 pounds in three weeks. It makes no sense. I just keep watching the scale go up and up.

I know that when you begin working out after a long period of relative inactivity then your appetite will increase. But I've been particularly careful not to let that get too runaway. Also, muscle weighs more than fat but I couldn't have caused that substantial of a change in 3 weeks. It makes no sense. Somebody with more knowledge of this stuff than me please offer some wisdom here... I am becoming disenchanted with working out right at the point where I should be gaining momentum.

Perhaps it is an age thing. Everything will start to move in the opposite direction from what it has my whole life. All physical processes are upended. The real way to health is to sit on my front porch sipping a whiskey, yelling at people to "Slow Down!"  Only a petty meanness will keep me fit. Who knows.

My flip-flops look defeated, like a pair of old futon mattresses, crushed by time and weight, an uneven lumpiness being their telling sign of resistance.

Somebody that focuses on these things please offer me some pearls of knowledge.  I am meeting up in Orlando with some friends from NYC in a few weeks and one of my buddies will be relentless about my weight if it is greater than his. I must triumph over that fat-ass, at any cost....  They probably won't even let us ride Space Mountain together, as is. They will direct us each individually to a special line to wait, a nondescript category that has only one spot to stand on. There we will wait for a special car to hold us. They'll be searching the crowd for, "Any single passengers?" to ride in any of the other cars. Any more that that might be dangerous. At the Haunted Mansion we will likewise be directed into a seat of our own. Where it would normally look as if a ghost was seated between you and a friend we will have to heave to one side or the other to make the illusion passable. Righting ourselves afterwards, chortling to ourselves, out of breath, craving a beer, etc.

Disney, of all places, knows how to manage fat people. The place was practically invented for them; if not invented, at least designed.

It's a small world indeed. For you it is, sir.

No, I kid. I am past the point of competing with my buddy in this way. I have bulked up to about 230 pounds, heavier than at any other time in my life by about 15-20 pounds. At first I was just putting on courtesy-fat for Rachel when she was pregnant. Then it became a sort of fascinating, macabre hobby. I stopped letting Rachel see me with my shirt off. I would take it off only once under the covers, in the dark, always pretending to be chilly, even in June. Sex should always be in the dark anyway. Even now I encourage Rachel to close her eyes and wonder, really let her imagination run. The mind, above all else, is erogenous. Why block its way?

One day I saw a picture of myself, taken with my own camera, while at work at Apple. There was something hideous in the image. It occupied nearly the whole frame. A doughy monster looking back at me with corpulent cheeks and well-upholstered eyes. I looked like 230 pounds of condemned veal, as Vidal used to say about Kennedy. Ted Kennedy, that is, Gore Vidal.

Ok, enough. I will fix the scale at the gym today. Re-calibrate it to suit my special dietary needs. It is easy. I know how. I will feel much better tomorrow.

I will sell this house today....

It seems as if many people have tired lately of all of the political talk. It's too bad, really. I am just getting fired up. The general election really brings to light the intense divisions within this country. The unhealed wounds of the past, present and future. We are all asking ourselves whether America is right or wrong, convinced that it can not possibly be both. As for rightness, we are all on that side, for all time. The insufferable wrongness can only be, and always is, the other guys. Each opposing side seems intent on running or ruining our country. Always has been, always will be. Apparently, this country would be almost perfect with exactly half of the population. Oddly, that's the perfect numerical standard for the other team also.

Each side convinced of something very simple about the other: Republicans are hateful racists and Democrats are freeloading socialists. These stereotypes are supposedly enforced through various initiatives put forth by each side. Universal health care will apparently ruin the nation or the second amendment should be thrown out, if not at least seriously reconsidered. It doesn't matter, one side wants health the other side wants guns, each reducing their political philosophies down to bumper sticker wisdom. Onward they march.

Many of the people I know seem too tired to argue any more. Nobody's giving in. Nobody's changing their mind. I had thought that Gary Johnson might be a viable candidate but then I read into his political history a little bit more. Nope. As the governor of New Mexico he advocated putting 13 year old children to death if they had been found guilty of murder, even retarded kids. This is not anybody that I can, or ever will, vote for. I know that one point should not guide such an important decision, but fuck that... That's a big issue to look beyond, to just ignore. What kind of a person would advocate such a thing? He has since flip-flopped on the matter. But it's like knowing somebody was once an extreme white supremacist. There is always that niggling suspicion that they haven't really changed at all, and probably never will.